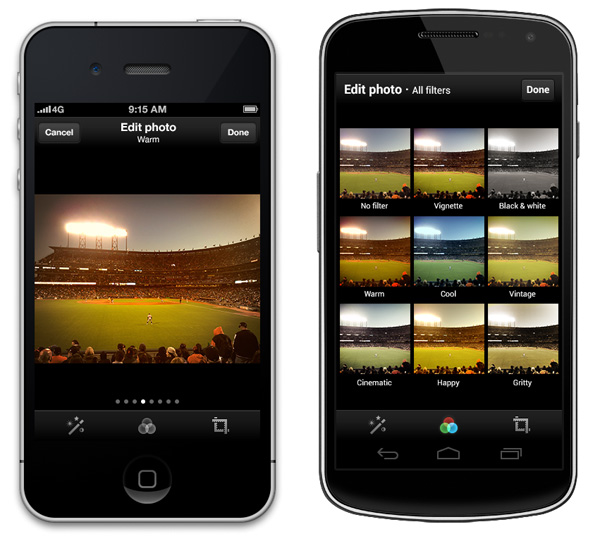 Over the past few weeks there’s been a lot of tension between Twitter and Instagram, which has today culminated in a shiny new set of filters being added to the Android and iOS Twitter apps.

We’ve heard rumours that Twitter’s been developing filters for what feels like years and this week the micro-blogging platform’s official blog has revealed its been working alongside the photo editing specialists at Aviary to create a set of eight, including a couple of black and white ones and others with a vintage toy camera feel.

But that’s not all, you’ll also be able to crop your images and even tweak lighting and colour effects with an auto-enhance option, so those who only usually make a few basic edits to their snaps will be able to do everything they want from within the Twitter app now.

Not to be outdone, Instagram today revealed a number of updates, including a camera redesign and a new black and white filter called Willow.

As you’d expect Twitter users are praising, ranting and moaning about the site’s new filters today, with some welcoming them with open arms, others using LOTS OF CAPS to say that they’ll never leave their beloved Instagram and most revealing that they think it’s great there’s an option for filters within the Twitter app now.

“Pretty nice. Not as fancy/wanky as Instagram, but good for tidying up pics.”

We doubt that many die-hard fans will start ditching Instagram solely for Twitter from now on, but the lack of integration between the two means that those who like to share their photos on Twitter regularly and want them to look good could now easily be swayed by these rival filters and editing features.

Other than its dedicated community of photo lovers, the only main advantage of using Instagram over Twitter is the way your photos are displayed after you’ve uploaded them. Although not everyone felt they were necessary, Instagram’s web profiles mean snaps look great and serve as a pretty library of photos that Twitter’s current media section just can’t compete with. However, we imagine that’ll be Twitter’s next step in becoming a one-stop-shop for online photos, so watch this space.