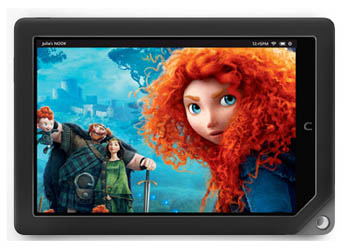 Nook has brought its video service over to the UK this week, which will allow those with Barnes & Noble’s range of eReaders to watch movies and TV shows from their tablets.

The service, called Nook Video, will offer content from HBO, NBC Universal, BBC and Warner Bros as well as many more channels and production companies over the coming months.

Nook Video is different to similar services because it’s the first of its kind to include UltraViolet integration, a cloud solution that’s offered up to customers when they buy DVDs and Blu-Rays, which provides them with digital versions of the content they’ve already purchased.

“Barnes & Noble becoming the first UltraViolet retailer in the UK is going to change the way consumers purchase and enjoy their digital movie libraries.

“With UltraViolet-enabled movies, consumers know their collection is stored securely in the cloud and can be accessed across numerous devices, including the NOOK HD and NOOK HD+. This convenience, combined with the ability for consumers to share their digital libraries with up to five family members, makes NOOK Video a very compelling destination to purchase movies.”

Nook Video will also be available on numerous other devices as an iOS and Android application.