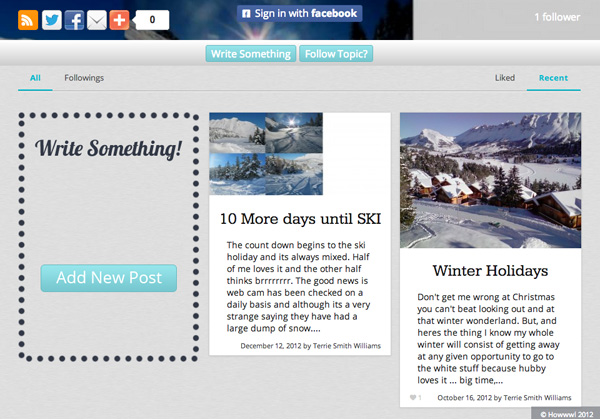 Yeah we know, we know, it’s really annoying to always be describing one shiny new platform in relation to a couple of old ones, but from what we can tell so far, new open-blogging site Howwwl mixes together some of the best features of both Pinterest and Tumblr into an interesting anti-blogging package.

Howwwl describes itself as being all about “open-blogging”, which means you don’t have to maintain a blog, write regular content or build up a readership to have your words “published” online. All you do is write about the topics that interest you and then visitors to the site browse by topics and read your snippets of text, follow topics or even follow you.

People do have their own profile pages, which feature all of the posts they’ve written and these admittedly look loads like Pinterest. However, you’re encouraged to browse by topic much more than by people, otherwise you may as well just write a blog. Looks-wise Howwwl is quite fancy, with a grid-like Pinterest layout and the liking and following functionality of Tumblr.

Howwwl is a great option for those who want a simple way to publish content but can’t be bothered with themes, building up a readership or any of that other stuff that comes with setting up a blog. However, for seasoned online geeks it’s hard to see why people would want to read such random snippets of content, when the key to a successful blog often comes from the things that Howwwl’s lacking, like a dedicated community, niche, regular content and a distinct voice. Having said that it’s not as if any Howwwlers would expect to create a lucrative business from their posts, they’re just coming together to share content, so maybe we should all be more receptive to this lazier and much more immediate style of blogging.

Obviously it’s still early days for Howwwl and we’re really not sure whether it’ll be a success, but it’s certainly one to watch in 2013. Whether we’re watching it swim the channel or slowly sink among other Pinterest and Tumblr lookalikes.