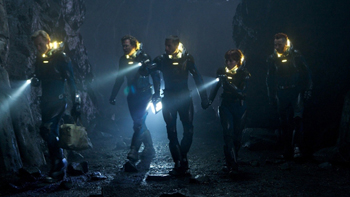 If you’ve seen Prometheus you’ll know that the movie is full of crazy sci-fi tech, but according to an article over on New Scientist today it might not all be that far fetched. Wait, don’t get too carried away, although we’d love to bring you news of a Michael Fassbender robot or a crazy cryogenic dream pod thing, it’s the little red cameras that get thrown up into the air and fly around that might soon be a reality, which are still admittedly pretty damn cool.

Boston-based startup Bounce Imaging has collected together a number of cameras, electronic sensors and LEDs protected by a rubber shell into the size of a tennis ball, which could be used to help soldiers and firefighters scope out a new environment for threats before they go charging in.

The futuristic gadget contains six different cameras and when it’s thrown into the air each takes two photos per second, sending a full 360° image back to a computer or smartphone. The infrared LEDs also work to build a better understanding of any scene too, even if there’s no light. Unfortunately the device is set to bounce through different environments at the moment, not fly like the gizmos in Prometheus. Shame.

According to the Founder of Bounce Imaging, Francisco Aguilar, the idea for the device came after the Haiti earthquake in 2010 when emergency services needed to get an idea of potential risk factors in different environments. However, we can totally see it being useful next time we embark on a crazy mission across space and need a better understanding of alien terrain.

The device is currently still a prototype, but Aguilar hopes it’ll be tested by SWAT teams in the US as soon as January.