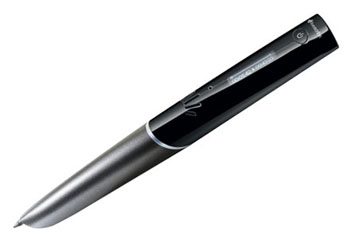 Although we’ve come across a range of pens that can record audio and notebooks that can transfer your doodles to your computer, no brand has ever produced a gadget that does all of that so easily and effectively as the guys at Livescribe.

The company’s pen portfolio to date features a number of different models that can record audio as you take notes and then the software works to sync the two together. This means you can replay speech, transfer both types of file to your computer or just play around with some of Livescribe’s cool apps.

This week Livescribe has launched a new pen called Sky, which is the same as its predecessor, the Echo, but it can hook up to your wi-fi network, which makes transferring content and updating software even more seamless.

After you’ve set-up your new Sky pen and hooked it up with your special Livescribe notebooks (you can’t use any old pad with one of these), you get a much more straightforward experience. There’s no need to manually sync your content by connecting the pen to your computer, it happens wirelessly and automatically now every hour.

Livescribe has also done away with its previous desktop software and now uses Evernote for everything, which is much easier and great for those who already use the note-taking service religiously already.

The experience is ver similar to the Echo, but easier, quicker and much more streamlined given that everything happens automatically and Evernote is your only port of call for your note-taking activities. It’s just a shame the pen is still so chunky, which is fine at first but doesn’t seem to be so finger-friendly after a while.

Even if you’re not a Livescribe convert yet Sky is relatively easy to get your head around and ideal for taking notes during lectures, presentations and interviews. In fact most members of the Shiny team wouldn’t leave the house without one…

2GB, 4GB and 8GB Sky smartpen models will be available to buy in the next month, but we’ll get you more detailed pricing and launch date details as soon as we can…