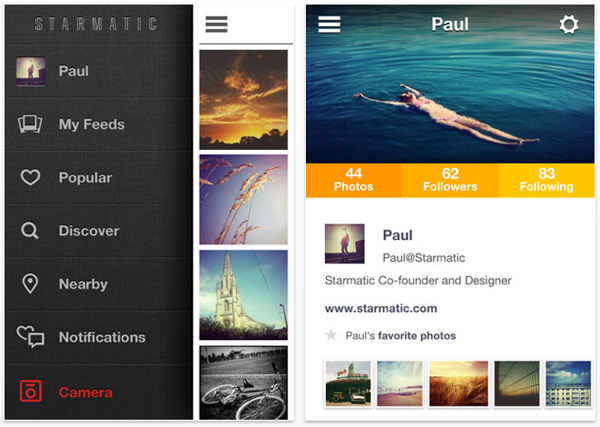 Back in July everyone’s favourite photo editing and sharing app Instagram surpassed a whopping 80 million users. However, despite its popularity and dominance in the mobile app arena, Instagram alternatives continue to be produced that offer very little to make them really stand out, just take a look at the likes of EyeEm, Deja Mi and tadaa.

Last week a new app called Starmatic was launched by a Paris-based startup, which at first glance falls into the lovely-but-predictable-Instagram-clone category. The app itself is actually based on the results you’d get from a Kodak Brownie Starmatic camera, which was made between 1959 and 1963. However, if you’re a fan of Instagram’s filters you’ll like the photos you can produce with Starmatic, even if the idea behind it is a little irrelevant to 2012 and kinda pretentious.

So let’s see what Starmatic has to offer and how it measures up to the king of the apps, Instagram…

Starmatic isn’t a standard photo editing app that you can just use to apply filters, like Instagram there’s a big community element, so you’ll need to log-in and create an account by either signing up with your details or hooking the app up to your Facebook or Twitter.

So in other words, it’s very VERY similar to Instagram when it comes to navigation.

As you’d expect from an app that’s been designed to mimic a toy camera, an overlay appears on the screen if you choose to take a new photo instead of pick one from the library. Some of you may find that a cute little addition, but although it’s in keeping with Starmatic’s vintage-like design it just seems a little 2010.

After you’ve taken a new photo or picked an old one you’ll have to make it into a little square and you’re then sent to the editing page. Along the top menu there’s a feature a little like Instagram’s Lux but less intense that adds a heavy dose of contrast to your image. There are blurring and tilt-shift effects too and you can choose between circular or rectangular options and stretch and tweak them with your fingers.

You’ve got the choice of adding a new set of filters here as well, but have to pay an additional 69p for them. Lame.

Along the bottom menu there are 16 pre-loaded filters, which are pretty diverse but all (obviously) rather retro-looking. Our favourite is probably the faded Indie with cool tones and a bit of vignetting, for self portraits and making faces glow then 1983 and PX70 are super flattering and Washed is awesome if you like your photos to look sun-faded and from the seventies.

In comparison to Instagram I actually prefer Starmatic’s filters even though they’re admittedly very similar. This is mainly because I share a lot of photos of food and people (I’m so annoying, I know) and in my opinion only a few of them look good against skin without going too dark and grungy. 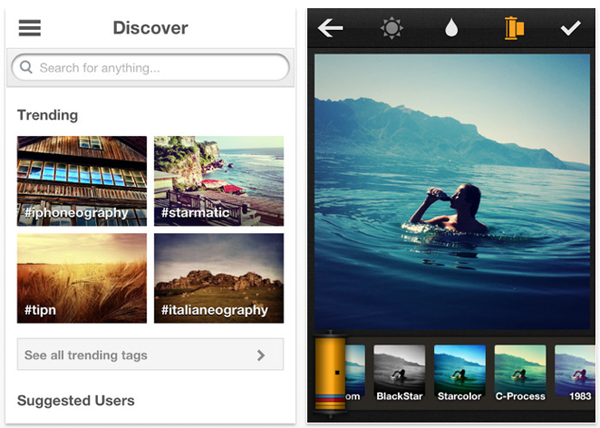 Once you’ve chosen your filter you’re taken to a simple page that just requires you to add a Title, Comment, Location and then provides you with sharing options for Facebook and Twitter.

It’s a shame there aren’t options to send directly through to an email address, Flickr or Tumblr account, like you can with Instagram. I personally send every photo from Instagram on to Flickr (gotta make the most of that premium account), so it’s a shame to not see that option, although I imagine most people wouldn’t really be that fussed.

To look through other photos you can browse your My Feeds tab for content uploaded by friends or check out popular trending tags and photos too. To look through photos you’ve got the Tumblr/Pinterest grid-like look, but then you can click on a photo and swipe from left to right to move between streams, which is a great way of navigating through different photos.

When you’re looking at a photo you can like it with a little heart, add a comment or even re-post, which is a little like Tumblr’s re-blogging feature and an interesting addition to a photo app.

The Settings page allows you to make a raft of changes to the way Starmatic works for you, including your Profile Info, Sharing Options, Find people to Follow and Invite to Starmatic.

Your profile on Starmatic is a little different to Instagram and looks more like your Path profile or Facebook time, with a cover photo/banner across the top, which you can change yourself. You can also add a bio, website and change the colour theme of your profile too.

Probably not. The Instagram community is so established, we’re used to the interface and plus, we’re pretty sure we love the Amaro filter more than most human beings we know. After all, just because an app is similar to Instagram and fans could easily become converts doesn’t mean any of them will actually be tempted to make the move elsewhere.

However, there’s no doubt Starmatic is a good alternative and the only app we’ve come across to date (feel free to correct us in the comments if you have a better favourite) that has awesome filters, an easy-to-use interface and cool sharing options, just like ‘the gram’ (we genuinely heard someone refer to Instagram as ‘the gram’ last week).

Have a play around with Starmatic (it’s free) and let us know how you think it compares in the comments.

Starmatic is available from iTunes for free.