Looking like a Pinterest for your personal and branded social media platforms, RebelMouse aims to gather most of your digital footprint in one handy place for others to see (Facebook, Twitter and Instragram for now but we expect them to tie in other channels as the platform matures).

Besides the initial questions surrounding Facebook and how its privacy settings work, this startup looks promising. Still in beta, with a growing list of tech titans and social media personalities signed up to it already, the service could just be exactly what we’ve been waiting for.

So what is it that could make RebelMouse the next big thing in social curation? 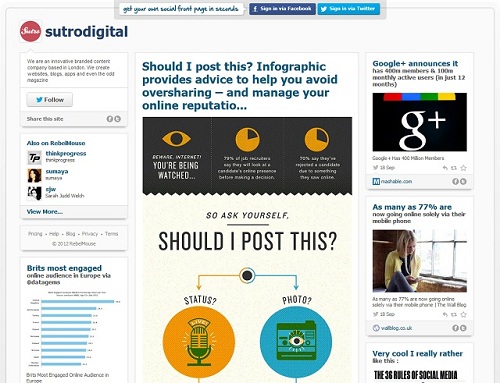 RebelMouse clearly got the memo that visual content is compelling. Taking the formula of bite sized posts with a header, subheader and an image (already proved popular through the success of Pinterest), you’re instantly drawn into the stories or updates as you scroll through a user’s profile.

To remind you of that all-important image, RebelMouse has created its own share button ‘Stick it!’ (like the ‘Pin it’ of Pinterest or ‘Take it to Branch’ of.. well Branch) for when you want to share a story you’ve stumbled across on the web.

From the opposite perspective, for visitors it is a great way to learn about the person or brand in one go without having to look at all three of their social streams. Who knows what you might have missed when you were busy doing other things?

You can also invite ‘collaborators’ to appear in your stream, which will be very handy for companies or publications where their employees’ social media activity is as important as the company’s.

Design wise you are fairly limited to what your profile looks like. The current minimalistic look appeals to me, but when coming out of beta and into advance mode you will be able to ‘hack your own CSS for your RebelMouse site.

But how does RebelMouse plan to make any money off its free service, besides the planned personalised iOS apps? According to Mashable ‘”[it] hopes to monetise organically by providing businesses an e-commerce platform, allowing people such as photographers and fashion designers to sell their wares in a dynamic, visual way. Another form of monetization they plan on is sponsored content’.

Are you ready to be curated?