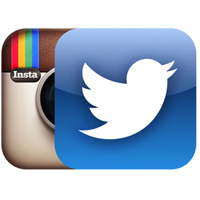 So it’s official (at least in the US), we now like taking photos and filtering the bejeezus out of them more than we like tweeting mundane stuff about our breakfasts and offices.

Research from ComScore shows that Instagram has more than 7.3 million daily users in the US compared to Twitter’s mere 6.9 million.

It’s not just the amount of users that are greater either, according to Fast Company obsessive Instagrammers spend a lot more time looking at photos than Twitter users spend scrolling through tweet after tweet after tweet.

After we did some research (OK, so we had a quick discussion in the office) we’ve decided that Instagram isn’t entirely separate from Twitter, because we send most of our snaps there too. Instead it seems like different activities and different times of the day dictate which we prefer, so for instance I tweet much more during the day at work but rarely tweet at the weekend and instead spam everyone with my rubbish Instagram shots. How do you use yours guys? Do you prefer one over the other or like a child with newly divorced parents you struggle to choose one or the other?