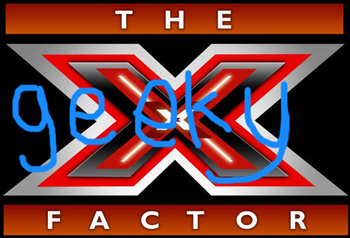 News has been spreading like wildfire across the internet this morning that super knowledgeable tech experts (and fame whores) Simon Cowell and Will.i.am are soon to be launching the hunt for the next big name in the industry to rival the likes of Bill Gates and Mark Zuckerberg. Yep, we have no words either.

According to The Telegraph today, at a recent event in London Will.i.am of Black Eyed Peas and stupid hat and glasses fame, revealed that he would be teaming up with Cowell to start a new tech-based endeavour:

“We’re working on a project called X Factor for tech — and it’s going to be out of this world.

“Singing and performance create a couple of jobs. But this will create lots.

“It’s about getting in touch with youth and giving them a platform to express themselves — whether that’s in science or mathematics.”

OK so it sounds fairly positive in theory if Will.i.am’s jumbled and vague explanation is anything to go by and it’ll be a great move if it gets “in touch with youth” about tech. Whatever that actually means.

We also imagine it’d be super entertaining, like some kind of X Factor, Dragon’s Den, Apprentice and hopefully even Battle Royale hybrid.

But on the other hand it all just seems far too contrived. But what else were you expecting from a member of The Black Eyed Peas and the big S-Co?

One thought on “WTF: Simon Cowell and Will.i.am to launch X Factor for tech entrepreneurs”