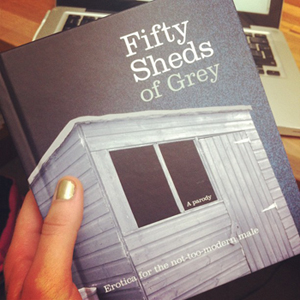 Ever since the world went crazy for Fifty Shades of Grey, its dirty sex scenes and terrible TERRIBLE metaphors for naughty bits, a range of parody TV shows, songs, eBooks and Twitter accounts have cropped up to take the mickey out of the saucy trilogy.

However, the most popular parody Twitter account has to be @50ShedsofGrey described as “erotica for the not-too-modern male”, which tweets about the dark, twisted and sordid relationship between a man and his shed.

Some of our favourite tweets include:

She knelt before me on the shed floor and tugged gently then harder until finally it came. I moaned with pleasure, ‘Now for the other boot.’

Shed builders don’t like to boast but I had to admit it wasn’t the first time I’d had to get planning permission for one of my erections.

‘Use me,’ she whispered, moistening her lips with her tongue. ‘Alright,’ I said, ‘Hold the ladder while I creosote the shed roof.’

She gazed up at me wide-eyed from the shed floor and bit her lip seductively. Unfortunately it was her top lip so she looked like a piranha.

Well now the Fifty Sheds of Grey phenomenon is about to take the real world by storm (or just act as a silly novelty present), as it’s been released as a hardback book.

We were lucky enough to be sent a surprise copy in the post and can tell you it’s as laugh out loud funny and absolutely ridiculous as you’d expect.

You can get your hands on Fifty Sheds of Grey from the 27th September from Amazon as a hardback book, which will set you back a rather pricey £9.99, or as an Ebook for 99p.