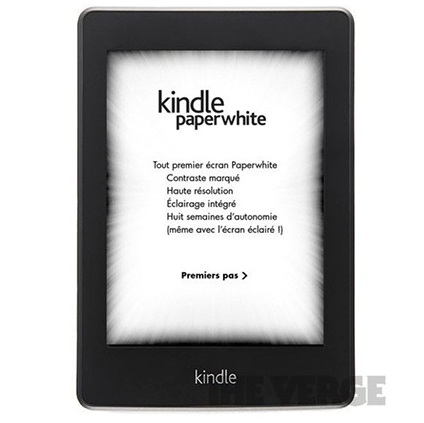 Amazon is set to launch something big at a San Diego press event on September 6th and as many of us are expecting the Kindle Fire 2, there are also rumours circulating that it’ll be joined by other new eReader models, including the Kindle Paperwhite, which we’ve hear will be a new backlit E-Ink reader device.

A picture of the Paperwhite made its way onto The Verge, looking very much like the button-free Kindle Touch, but boasting an edge-lit display while still retaining the easy-on-the-eye, paper-like E-Ink screen. In other words, it’ll work as great during the night as it will in direct sunlight.

The images leaked show some French text onscreen, which also hints at a few of the improvements made to the Kindle device. Contrast ratio should be slightly higher, leading to darker text on a lighter background, and the resolution should be improved too. That lighter background will no doubt be elevated by a slight illusion, with a new darker chassis making the digital pages appear lighter too. Battery life is expected to be still around 8 weeks long, regardless of whether or not the light is being used or not.

With September 6th just a week away, we’ll soon have confirmation of the device’s specs, and indeed whether or not it exists at all or is coming to the UK.