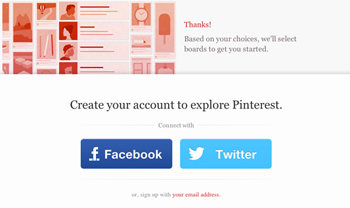 Social bookmarking and visual inspiration site Pinterest has finally stopped being so damn secretive after opening its doors to the public for the first time.

It’s always been fairly easy to get hold of a Pinterest invite, but now there’s no waiting around to become a user, you just fill in your details and get pinning. The public opening comes at the same time as a fancy new redesign, which includes pins that flip around once you’re done with them and a range of new categories.

Despite the fact many have been questioning whether Pinterest really has any long term value, its user base continues to grow by the day and dedicated pinners are still going strong attaching anything from examples of great architecture to cupcake decoration ideas to their boards, so don’t expect it to die a slow death anytime soon.

However, many big Pinterest fans are worried that opening the platform up to the public may lower the overall quality of the content. Sure it wasn’t hard to get your hands on an invite before, you only had to fill in a form or ask a friend for one, but it’s still a valid concern that with no barrier to entry things might take a turn for the worse…