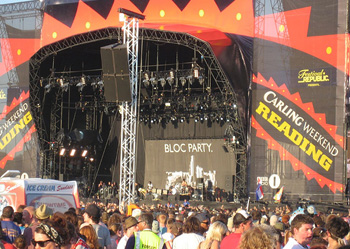 If you went to a festival this year and dropped your phone down a toilet, left it somewhere in a beer-fuelled daze or accidentally threw it into the crowds never to be seen again then you may be careless, stupid and a bit of a drunk, but you’re definitely not alone, as research has found that more than £130 million pounds worth of mobiles are lost at festivals each year. Ouch.

The study, conducted by mobile network giffgaff, estimated that on average more than 650,000 of us have had phones lost or badly damaged at festivals this year. According to the figures around 27% of those unfortunate revellers not returning home with a mobile simply dropped it at some point, 20% smashed it and 15% had them stolen. So there obviously wasn’t a “too drunk to remember” option to tick as part of the survey then…

Those polled were also asked how they tend to use their mobiles when they’re at festivals and as well as making calls and sending frantic texts to find out where their mates are, unsurprisingly 18% like to upload photos documenting their drunken antics to social networks, 15% tend to be sensible and download torch and map apps in advance and a crazy 1% said they use their over-priced phones to hammer in tent pegs. We’re not sure whether that’s really resourceful or the stupidest thing we’ve ever read.

Related: Lost your phone? NeedNumbers.me gets contacts from Facebook