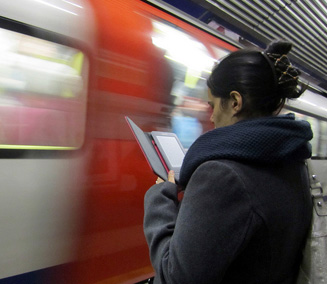 Online retailer and king of the Kindle Amazon has revealed that, for the first time ever, more people are now buying eBooks from its website than printed books.

It’s only been two years since Amazon introduced its first Kindle eReader device and in that time we’ve witnessed huge changes in the publishing industry, from ways established and up and coming authors release their work to ways the public choose to buy and consume them. According to The Guardian, Amazon customers are now buying more eBooks than both hardcover and paperback real life actual books combined. Figures released by Amazon today reveal that since the start of the year, for every 100 books sold from the site, customers downloaded 114 ebooks.

However, this shift doesn’t necessarily mean that we’re all ditching printed books in favour of modern Kindle equivalents (although we’d imagine a lot of you are), as Amazon also revealed that British Kindle owners are now buying four times as many books as they were before they owned the popular eReader. But are we all actually reading the eBooks we’re downloading, or just filling up the Kindle in a spending frenzy because it’s just so easy?

An Amazon spokeswoman told The Guardian:

“As soon as we started selling Kindles it became our bestselling product on Amazon.co.uk so there was a very quick adoption … [And they] are buying four times more books prior to owning a Kindle.

“Generally there seems to be a love of a reading and a renaissance as a result of Kindle being launched.”

Whether it’s because they’re small, convenient or hide our saucy/embarrassing/child-like reading habits, Kindles are clearly not the faddy gadgets many suggested they were around Christmas time, but if Amazon’s recent stats are anything to go by it looks like they’re taking pride of place in our front rooms, handbags and briefcases over the boring paperback.

Related: Fifty Shades Of I DON’T CARE: 10 Alternative eBooks fit for your Kindle