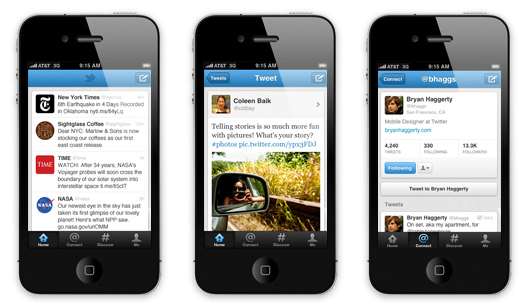 This week Twitter has rolled out a new version of both its iOS and Android application with added notifications, expanded tweets and more efficient search functionality. Here are just a few of the key features that have been added or tweaked by Larry the bird and his friends:

Twitter added expanded tweets to the web a while back, but they’ve now been included as part of both the iPhone and Android apps too, allowing users to view snippets of content and watch videos underneath and details of the tweet.

To take advantage of the fact we all use Twitter to moan about live TV, the micro-blogging platform has also added in extra functionality when it comes to experiencing events, presenting a dedicated page for hash tags to make it easier to follow the conversation (check out: twitter.com/hashtag/nascar).

The new apps now support push notifications for certain tweets from certain accounts, so you can get notifications from people you follow whenever they tweet or retweet. This may seem a little stalker-ish, but Sung Hu Kim, Product Manager for Spotify’s Mobile team, suggests it’d be a good idea to set up these kinds of notifications for local Twitter accounts in your area in order to keep on top of the news that’s relevant to you.

Twitter’s Search tool has had a minor upgrade with autocomplete functionality, so lots of suggestions pop up straight away when you go to search for someone.

It hasn’t been officially announced by Twitter, but a number of sources have also been commenting on the fact that there are no longer details about which client a tweet came from underneath it like they’re used to be, it’s just now “from Twitter”. This move could just be a matter of tidying up the look of the app when there’s so little space, or it could be a sneaky move from Twitter to take the focus away from other clients.