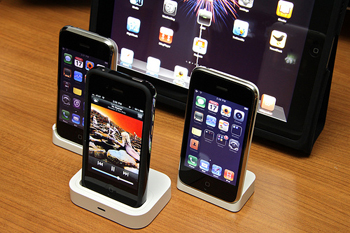 Most of us are well aware that we’re too attached to our gadgets, just look at the studies that suggest we check Facebook before we do anything else in the morning, text during sex or sit back and watch the world implode later today if O2 doesn’t get its act together.

However, new research shows that our gadget addiction is worse than ever and we only actually spend an average of one hour a day away from tech products. It’s hardly surprising and for many of us totally necessary, but isn’t it just a little bit worrying at the same time? Or is that just us?

The study, commissioned by MyVoucherCodes.co.uk, polled 1,239 people and asked them about their relationship with technology in 2012. Once they’d taken into account all of the gadgets they check, listen to and interact with most found they only spend around 1.2 hours away from any kind of technology.

The top device Brits just can’t seem to pull themselves away from are our computers and laptops, with 31% saying they spend most of their time tapping away at their keyboards. The mobile phone came in second place with 19% of our time, followed my tablets, radios and then games consoles.

The respondents were then asked a pretty damn scary question, “how often do you go our without your mobile phone?” and 87% said they would NEVER step outside without it strapped to their hand.