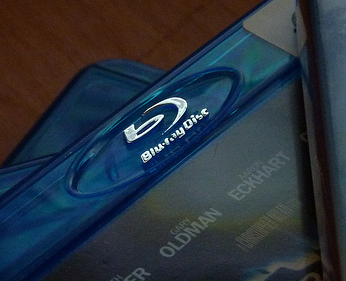 Blu-ray discs first became available to the public back in the summer of 2006 and since then they’ve smugly looked down on us from shop shelves across the country, making us feel poor, inadequate and sad about the fact we just have regular DVD players.

Well it seems we’re not the only ones who’ve had enough of the Blu-ray hype, with the majority of Brits admitting they never buy the discs because they’re over-priced and some suggesting they’ve never even been able to tell the difference between a regular DVD and a Blu-ray one anyway. Ooo BURN.

The study, commissioned by MyVoucherCodes.co.uk, polled 1,348 people who have all watched a Blu-ray movie at some point over the past few years. But despite the fact they’ve watched a Blu-ray disc before, 81% said they don’t own one and the ones that do only have an average of three, which is crazily low in comparison to the 70 to 100 regular DVDs the majority of them have.

They were then asked the reasons why they decided not to purchase Blu-ray discs and 53% said that they were too expensive, 39% said that they didn’t see any difference at all between Blu-ray and standard DVDs and 62% said they’ve never been able to afford a device that would allow them to play the discs in the first place.

There’s no doubt that Blu-ray discs do trump regular DVD’s when it comes to the nitty gritty specifications, especially if you’re a fan of HD quality movies and action scenes, but when the prices are so high it’s no surprise consumers are willing to settle for the humble little DVD in order to save a few pennies.