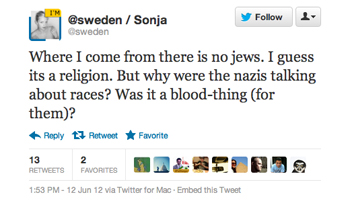 Ahh Sweden, it’s just full of hot women, blonde people and Vikings, right? Well no, they’re all stereotypes and part of the reason the Swedish tourist board has its own Twitter account, so you can find out what the nation and its people are REALLY like (many of them are hot and blonde though, FYI).

However, the @Sweden Twitter account isn’t controlled by some PR person or government official. For the past seven months it’s been passed around various Swedish citizens who can do with it what they please. It sounds like a nice idea, right? The Swedish government can just let Swedes talk about how awesome it is to be Swedish/live in Sweden/visit Sweden. Thomas Brühl, CEO of VisitSweden, told Mashable:

“No one owns the brand of Sweden more than its people. With this initiative we let them show their Sweden to the world.”

Awh. Sweet. But in practice it’s just a huge car crash waiting to happen and even a toddler could have told you that. The most recent Swede to man the fort (Sonja) has made a few social media fails, which have involved tweeting about Nazi Germany, what it means to be Jewish and how to tell whether someone is Jewish or not. None of the tweets have been super offensive, they’re all just a little bit weird and the kind of questions your gran might ask after she’s had a bit too much wine.

Some users think the @Sweden social media experiment is great and shows that the country respects freedom of speech, some think the person in charge this week is awesome and challenging conventions, but we can’t help but think if you’re discussing the motivations of the Nazis in a 140 character tweet then you’re doing something wrong.