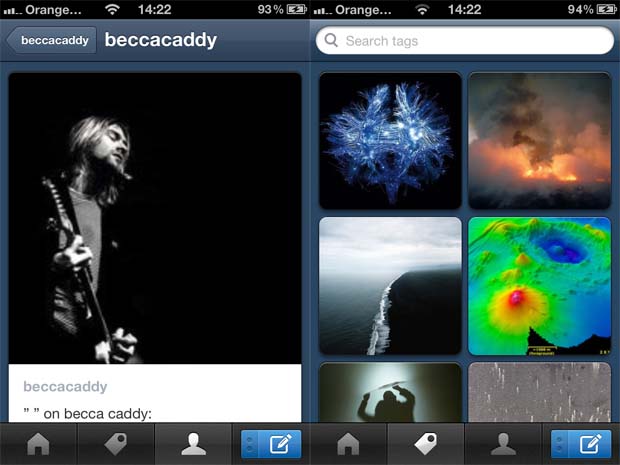 Today Tumblr has released the latest version of its iOS application, complete with a host of changes to the main dashboard, quality of images, offline support and even Spotify integration.

We’ve all been waiting for a revamped version of the popular app since CEO David Karp hinted about a “completely rebuilt” offering, but we didn’t expect him to deliver on that promise quite so much in practice…

The newest iteration of Tumblr for iOS has added in more tap and swipe functionality throughout, which makes it all feel much easier and more intuitive than before.

Images now look a lot better as the app supports high-res photos, which is important for such an image-based platform.

A very handy new feature for big Tumblr fans is that you can now do all kinds of things when you’re offline, like commenting, posting and re-blogging. Obviously things go live on the site once you’ve connected to the internet and you’ll need to load content to read while you’re connected too, but it’s still really handy and a great new way to fill those lengthy commutes.

We all know that Spotify came to Tumblr earlier in the year, but now users can share songs from the music streaming service from within the app too.

The changes are pretty substantial and make blogging using the Tumblr platform even quicker and easier than it already was (and it was already REALLY quick and easy). Of course it’s a shame that there still isn’t a dedicated application for the iPad, but we expect that to follow pretty soon…

If you don’t have it already, the Tumblr app is available from iTunes for free.