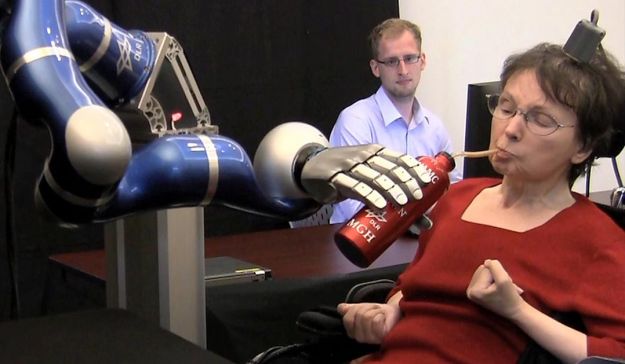 Researchers at Brown University in the US have created a robotic arm designed to help disabled people carry out basic tasks. Now we know what you’re thinking, that’s been done before. A lot. But this new device is unique in that it can be controlled by your mind.

For some time now robotics engineers have been developing solutions for elderly people and the disabled, so they can live relatively normal lives without the need for constant care. Although there have been some pretty ground-breaking devices pioneered over the years, the BrainGate2 from Brown University has to be the most impressive, despite the fact it sounds like something straight out of a sci-fi movie.

The BrainGate system consists of a robotic arm, which is controlled solely by a microchip that’s implanted inside the user’s brain. Digital Trends published more details directly from Brown:

“The BrainGate2 pilot clinical trial employs the investigational BrainGate system initially developed at Brown University, in which a baby aspirin-sized device with a grid of 96 tiny electrodes is implanted in the motor cortex — a part of the brain that is involved in voluntary movement. The electrodes are close enough to individual neurons to record the neural activity associated with intended movement. An external computer translates the pattern of impulses across a population of neurons into commands to operate assistive devices, such as the DLR and DEKA robot arms used in the study now reported in Nature.”

The BrainGate system is still in the very early stages of development and there are a number of different issues that would need to be addressed before it would ever be rolled out on a wider scale. For instance, the arm itself is a little clumsy and it can’t be controlled wirelessly yet, so the user still needs to be hooked up to the robot at all times for it to work. However, Dr. Leigh Hockberg, lead author of the BrainGate2 study, said:

“We have much more work to do, but the encouraging progress of this research is demonstrated not only in the reach-and-grasp data, but even more so in S3’s [the participant’s] smile when she served herself coffee of her own volition for the first time in almost 15 years.”

You’ll also be happy to know that despite the fact the team need to tamper with delicate brain tissue and stick a microchip to it, the participants have had no adverse side effects to date.