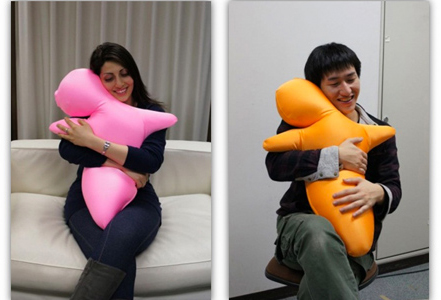 This is the Hugvie, a creepy, colourful little robot baby that’s designed to make you feel more of a connection with those you talk to on the phone.

The Hugvie is a robot/cuddly toy hybrid developed by the Osaka University and Advanced Telecommunications Research Institute International (ATR) in Japan. Its exterior is soft and cuddly in order to mimic the sensation of hugging a friend, lover, family member or particularly squishy pet. It’s meant to be small enough to hug, squeeze and carry around with you and although the fact it doesn’t have features is a little creepy, it’s so the Hugvie can be whoever you want it to be, which sounds a little dodgy, but this is a robot for cuddles remember, JUST cuddles.

The robot isn’t just a soft piece of foam, it has a pocket in its side, which you can put your mobile phone into so it’s like you’re interacting with the person on the other end. The Hugvie is also fitted with a number of sensors and vibrators, which mimic a heartbeat and match the characteristics of the caller’s voice. So, when their voice gets more happy or excited, the heartbeat will get faster.

The team are now developing ways for the robots to actually mimic the movements of the caller on the other end of the phone, so when you hug your robot, their little robot moves and hugs you as well. It’s cute, it’s creepy and like all moving robots that are designed to vibrate and touch you, it has the potential to be a pretty advanced sex toy too.

One thought on “Creepy, faceless robot baby will make you feel better on long distance calls”