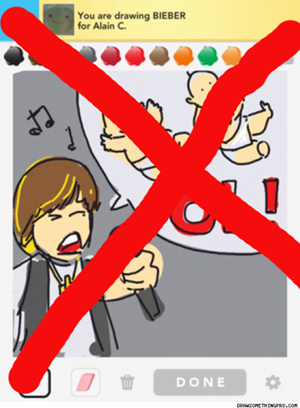 The popular Pictionary / Words With Friends hybrid Draw Something amassed more than 50 million users in a matter of weeks and a large proportion of our lives in March were spent trying to think of the funniest ways to doodle Bieber and dandruff. However, as we predicted last month, it seems hardly any of us are actively playing with it anymore. Awh.

Despite gaining a huge following in a record-breaking amount of time, according to a recent study, more than half of the Brits who were addicted to Draw Something a month ago now play less than once a week.

The research carried out by discount website MyVoucherCodes.co.uk polled more than 1,000 users and found that 54% log in to play the app less than once a week now, when back in April the study found most people spend at least 10 to 30 minutes perfecting their drawing (or should we say chubby finger doodling) skills.

MyVoucherCodes.co.uk wanted to get to the bottom of why people are suddenly so sick of the app and 47% of those polled said it was because the novelty had worn off, whilst 31% said they were just “bored” of it. We also think it’s because there just wasn’t enough variety, you can only draw hot sauce and Jordan’s breasts so many times before you start to lose the will to live.

Although it may seem sad to mourn the death of an app that held such a special place in our hearts our bosses certainly aren’t as upset. Back in April two thirds of Draw Something users admitted to playing the game during work hours, but we’re sure Facebook stalking, the logo game and more excessive tweeting can easily fill that void.

One thought on “It's official, Brits have given up on Draw Something”