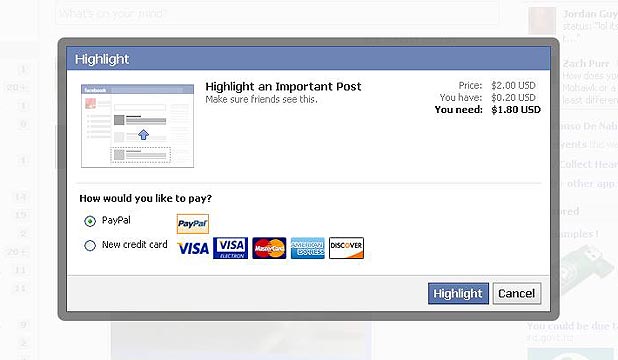 Facebook could be trialling a new feature that’ll give attention seeking users the chance to part with their pennies in order to make their status updates even more prominent. Oh we just can’t wait.

Everyone has at least one insane person from their school days who they just can’t bear to delete from their Facebook friends list. You know, the girl who writes the most melodramatic updates about her sex life, illnesses and dramatic relationship woes. Well now if they don’t think they’re getting enough attention about the fact they were dumped by text or keep throwing up they can pay to force your eyes to witness their car crash lives again and again and again.

According to Digital Trends and Stuff, Facebook is currently testing a new feature that’ll allow users to highlight posts by paying a small fee of around $1.80 with Paypal or a credit card. Their status update will then stay stuck at the top of the news feed for a specific amount of time meaning even more people will see it.

The new feature won’t be rolled out to all users just yet, it’s currently only being tested over in New Zealand. However, if it proves to be a hit it won’t be long before we can all start using our hard earned cash to buy more attention from our fake Facbook friends. Does this make anyone else feel a bit sad about being on the planet? Just us?