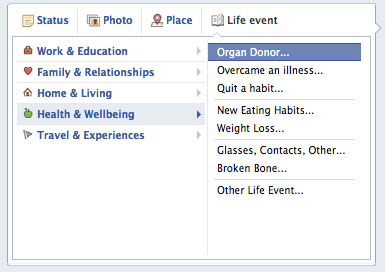 After a great deal of speculation, it seems Facebook’s life-saving new feature is the option to tell friends and family that you’re an organ donor all from within your Timeline.

We spent a large part of yesterday trying to work out what new Facebook feature would allow Zuckerberg and the gang to claim they’d have “the power to save lives”. Now admittedly we dreamed up some fantastical scenarios, but in the end we’d have put money on the new feature being about responding to emergencies or increased security. However, a new press release in the Facebook Newsroom reveals that the new feature is about notifying your friends and family that you’re an organ donor:

“Starting today, you can add that you’re an organ donor to your timeline, and share your story about when, where or why you decided to become a donor. If you’re not already registered with your state or national registry and want to be, you’ll find a link to the official donor registry there as well.”

Apparently the feature won’t roll-out to all countries just yet, but it’s working in the US and the UK. In order to go tell all of your Facebook friends you’re an organ donor and have it added to your Timeline, simply go to ‘Life Event’, click ‘Health and Wellbeing’, click ‘Organ Donor’ and add in your details.

If you’re not already an official organ donor you can then go through the link to a special registry to become one. You can select who sees this status, but obviously sneaky Facebook has set it to public automatically (why are we not surprised). Once you’ve added your organ donor status, it’ll appear as a life event on your Timeline AND in your about page too.

So will you be telling everyone you’re an organ donor?

One thought on “Facebook: Add that you're an organ donor to your Timeline”