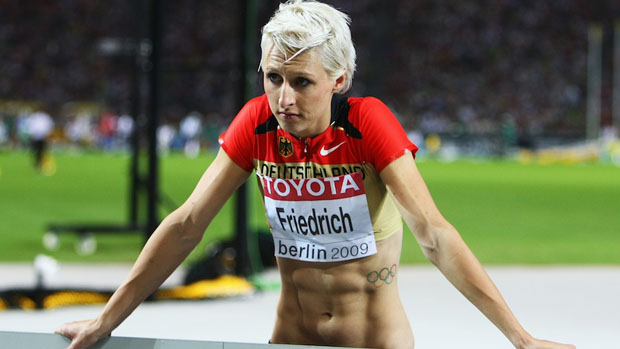 A German woman posted dirty, nakey photos that her crazy cyberstalker sent to her on Facebook, revealing his email address and name too. The move has left many questioning whether she should have really revealed his identity in a public space. We think UH… HELL YEAH.

Ariane Friedrich, a German athlete and our new hero, has a fair few online fans in her native Germany because she’s a rather talented pole vaulter. But, it’s fairly obvious that the more fame she gets the more internet crazies will come out of the woodwork.

Recently Friedrich has had a lot of trouble from a certain online stalker who continued to send her photos of his man bits despite her obviously not caring/being really freaked out by his blatant craziness.

Instead of ignoring his photos Friedrich decided to post them onto her Facebook page, along with his name and email address. She wrote:

“There is simply a point where enough is enough. It’s time to act, it’s time to defend myself. And that is what I am doing. Nothing more and nothing less.”

To most of us her actions probably seem really freaking cool and totally justified, but now some are questioning whether what she did was actually against the law, because in Germany those accused of being stalkers can’t be named. Yes we know, we know, it’s a mental kind of logic to think a woman who’s been subjected to this kind of abuse would come under fire. But yet, it doesn’t surprise us at all.

The thing is Mr. Stalky gave up all right to his privacy when he sent Friedrich a number of gross and offensive photos and maybe public humiliation will stop him from doing it again. Maybe.

Oh and stalkers take note, if you really must take photos of your junk and send them to random people, choose someone who’s less famous and tough.