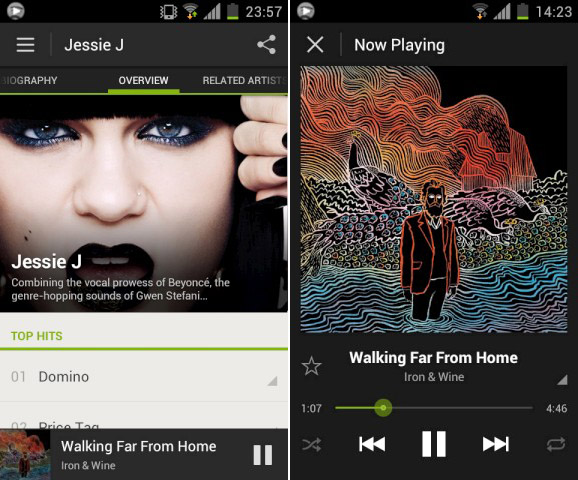 Spotify is set to roll out a big new makeover to its Android offering complete with easier navigation, high-res album artwork and a range of cool new features.

If you’re a Spotify-loving Android user you’ve probably always feel like you’ve had a bit of a raw deal when it comes to the mobile application of the uber-popular streaming service. While iPhone owners get a slick, clean interface, the Android version of Spotify has always been a bit of a… well… mess.

Until now that is, as it looks like CEO Daniel Ek and his gang have finally recognised this, as Tech Digest has just been sent a preview build of a forthcoming Android makeover for the app, which now looks and feels much much better.

Fully supporting Android 4.0, the app has been redesigned from the ground up to make use of Android at its best. It now features a left-hand slide-out panel for navigating social sections and browsing pals’ playlists, checking out new releases, your inbox and app settings.

Album artwork now comes in high-resolution, while the related artist tab appears for the first time in mobiles too.

There are also a host of other little improvements, such as locally downloaded playlists appearing at the top of your playlist pile instead of dotted among you many created song collections, meaning you’ll easily be able to avoid tapping into your 3G allowance.

And there’s still more to come; Spotify will be adding folder support and Last FM scrobbling before the app goes live in Google Play in the near future.