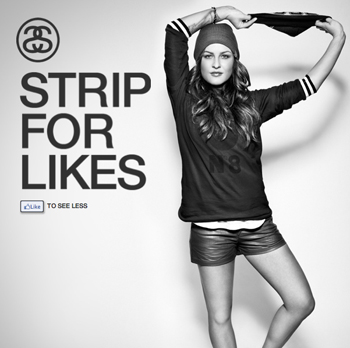 As part of a new Facebook campaign Stussy claims a hot model will strip for likes. It sounds kinda fun and sexy, but is it really just plain desperate?

Brands are always trying to get more likes on their Facebook pages, and despite the fact social media “experts” and marketing whizz-kids spend hours agonising over how to increase those numbers some attempts are just cringeworthy or a bit lame (hey if you’re awesome head over to Shiny Shiny’s Facebook page and “like” us, yeah? We’ll totally send you naked photos).

Well a new Facebook campaign by clothing brand Stussy for its Dutch page has adopted a rather risque tactic to garner more “likes”. The brand has asked a rather pretty young lady to strip as more and more people go ahead and hit that “like” button. It’s a fairly straightforward mechanic, but we can’t help but think that kind of behaviour belongs at a drunken house party and not on a serious Facebook page, right?

Now you won’t be too disappointed, if you click “like” you do see a bit of action, she takes off a few items of clothing on your screen. BUT, don’t expect to see some kind of X-rated strip tease, due to Facebook’s terms of service she won’t even get properly naked, you just might see her in a bikini EVENTUALLY.

The thing that worries us the most is there’s very little information about the clothes she’s wearing or anything about the brand at all really. There are even fans requesting information about the products, which doesn’t seem quite right. At the same time the move has certainly got people talking, so we’re really not sure what to think…