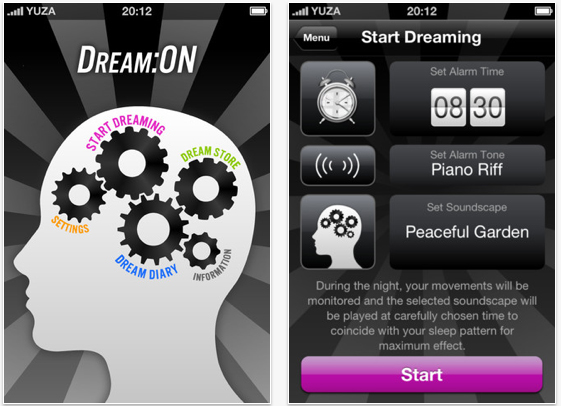 A popular psychologist has teamed up with developers to create an iPhone app called Dream:ON, which he plans to use in a widespread experiment in order to find out if we can really manipulate our dreams.

Richard Wiseman is a well-known author/magician/psychologist/author hybrid with a huge Twitter following, fascinating mind and reputation for debunking myths and supposedly paranormal phenomenon. His latest experiment aims to find out whether it’s REALLY possible to manipulate dreams and he’s created a shiny new app to help him out.

OK, OK so it kind of sounds like part of the plot from Inception or Vanilla Sky, but the new app simply monitors a user’s behaviour and then plays certain sounds in an attempt to manipulate what happens. Don’t worry about completely giving your subconscious over to an app, according to Wiseman the sound patterns have been specially created to make people think of nice, lovely things. Awh.

To use the app you first set an alarm and choose a ‘soundscape’ that you’d like played to you during your sleep cycle. You then just leave the app running while you sleep and when it senses you’ve entered REM sleep (which is apparently an optimum time for dreaming), it’ll play the music to you.

Now we shouldn’t all get too excited, this isn’t a surefire way to ensure Ryan Gosling makes an appearance, the different sound patterns are (for now) purely an experiment to find out what happens and users are asked to fill out a dream report so the researchers behind it can make it even more effective in the future.

“We have created a new way of carrying out mass participation experiments. We still know relatively little about the science of dreaming and this app may provide a real breakthrough in changing how we dream, and record and track those dreams.”

As Wiseman is known for debunking myths and paranormal phenomena, it’ll be interesting to see what he’s trying to prove with this experiment. We can only presume it’ll be to show dreams can be manipulated and we have control over them, not that they’re some airy-fairy sign and have hidden meanings.

Either way, we’re interested in trying it out for ourselves. Let’s just hope there aren’t some crazy hidden messages in the sounds and we’re all being brainwashed into Wiseman’s own private army of zombies. We warned you.

Available from iTunes for free