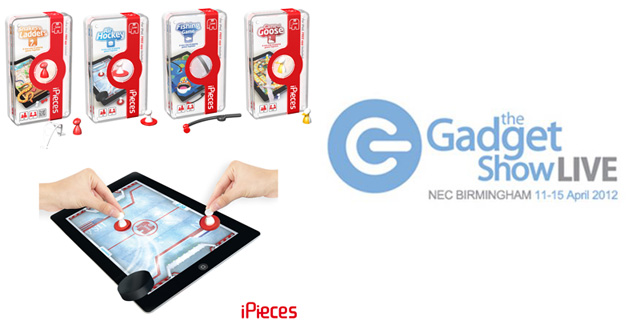 Shiny Shiny has teamed up with Jumbo to celebrate the games company’s attendance at The Gadget Show Live next month by giving our readers the chance to win three pairs of sold-out weekend tickets to the event in Birmingham – plus a bundle of cool iPieces games too!

Jumbo is showcasing a number of products at the show and has recently launched iPieces (which we wrote about here on Shiny Shiny in January), a range of iPad games that use interactive playing pieces, allowing up to six people to play their favourite board games. This new style of multiplayer game is fun for the whole family, as the 3D iPieces activate special effects on your iPad, bringing each game to life through visual animation and sound effects.

If you’re lucky enough to be one of our three winners, you’ll get your hands on an Air Hockey, Fishing, Snakes & Ladders and Game Of Goose game (£9.99 each), as well as two weekend tickets to the Gadget Show Live in Birmingham’s NEC that’s taking place between the 13th – 15th April 2012.

For a chance to attend the show in Birmingham and win the iPieces games, then all you have to do is tell us what your dream game would be, and don’t worry about the restrictions of tech, time and space. Maybe it would be to open your front door, hop on a water slide and collect singing neon starfish on your way down to work to win cakes. We want you to be as inventive, silly and imaginative as possible.

To enter, you can write your ideas on our Facebook page (after liking us of course) or tell us on Twitter, we’re @ShinyShiny.

You’ve got until 5pm on Wednesday 28th March 2012 to get your emails over to us and then we’ll be getting in touch with the winners and asking for their contact details, so be sure to check your Facebook message and Twitter DMs the day after!

Make sure you’ve read our Shiny Media Terms & Conditions before you enter.

If you’re one of the winners, make sure you visit the Jumbo stand (C190, Hall 9) to see the current iPieces games and get a sneak peek at some of the new additions to the range too!