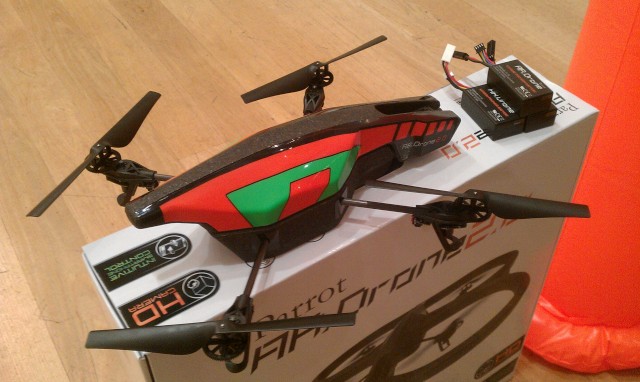 Shiny Shiny and Tech Digest went along to a rather unusual preview event in London last night and got an exclusive hands-on with the Parrot AR Drone 2.0, a crazily advanced, huge and super fast iPad/iPhone controlled helicopter. Gerald Lynch, the editor of Tech Digest, wrote up his thoughts about Parrot’s latest Drone, which we have a feeling will be one of the top toys of the summer…

Toys for boys don’t get much cooler than the Parrot AR Drone quadricopter line. Lightwieght, iPhone controlled four-bladed remote control helicopters, they stole the CES limelight back in 2010. Back with a new and improved version (set for release in the UK in June 2012) we went hands on with the Parrot AR Drone 2.0 at a preview event last night, managing a mid-air collision in the first 20 seconds of getting our hands on the controls. Whoops!

That’s not to say the AR Drone 2.0 is difficult to pilot. Far from it in fact; thanks to a new iOS app (compatible with iPod touch, iPad and iPhone) it’s easier than ever to fly the Drone. A new “Absolute Flight” method has been added, making flight controls very intuitive. Two thumb sticks are onscreen. While the right stick is a touch slider that controls height and rotation, the left one is actually a button which activates the iOS device’s gyrometer. With the button pressed, it’s just a matter of leaning the controller forwards, backwards, left or right to get the chopper heading about in the appropriate direction. 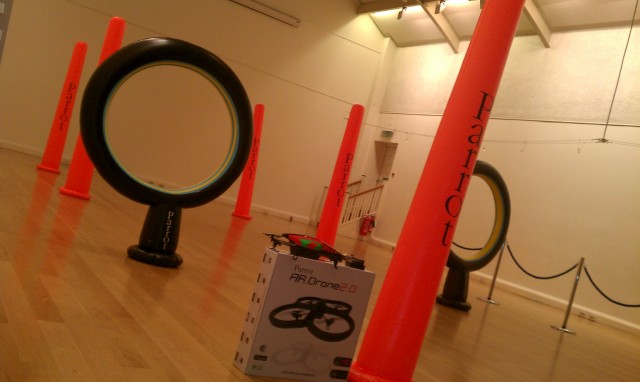 Once you’ve mastered the basic controls, you’re now able to pull off stunts with the Drone too. Double tapping on the app’s thumbsticks sees the Drone 2.0 do a quick mid-air flip, which raised gasps from the journalists collected at the preview event. The Drones are surprisingly stable too; we pushed down on one hovering in mid-air near us, and it was able to adjust its pitch and yaw accordingly to remain in flight. With the range of the Drone only limited by the strength of your device’s Wi-Fi signal, you therefore can trust in the Drone’s ability to fly significant distances, even in fairly harsh weather conditions, without too many problems.

Perhaps the most useful new feature on the Drone 2.0 however is the ability to shoot 720p video directly from the chopper. When in flight, you get sent a real-time video feed directly to your iOS device of exactly what the camera is picking up. If it’s something worth documenting, you can quickly hit the record button, which beams the video into storage on your device, ready to be quickly uploaded to YouTube. The same can be done with still images, which can be pushed to Picasa. Facebook sharing is top of the list of features coming in a forthcoming update too.

If the AR Drone 2.0 has one Achilles Heel, it’s battery life. You’ll get just 12 minutes of flight time per fully charged battery, and while the battery is easily removed and swappable, we weren’t able to get confirmation of the cost of replacement batteries. If they’re reasonably cheap that’s not so big a deal, but it could be frustrating to have to head home from the park after less than a quarter of an hour’s flight. With that said, we recognise it’s a necessary evil; for flight control to be as effortless as it is with the Drone 2.0, the overall weight of the chopper has to be kept low, and a larger capacity battery would surely add significant heft.

But when it’s in the air, it sure is a damn lot of fun. Hitting Amazon, Firebox, Harrods, Selfridges and select high street retailers and hobby shops in June 2012 for £279.99, we’ll try to bring you a full review in the near future.