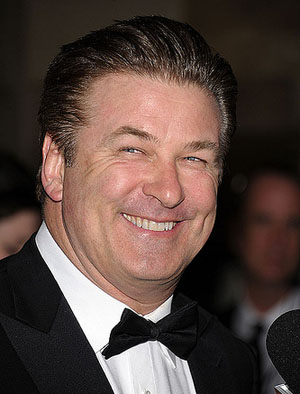 Everyone’s favourite Baldwin (who’s alter ego is the incredible Jack Donaghy) has mobilised his Twitter followers to get rid of an online troll. But was that REALLY the right thing to do in retrospect Jack?

Despite the fact there’s far too much Bieber-related content online, the single most annoying thing about the interwebz has got to be angry trolls. They talk about irrelevant rubbish, they swear, they’re weirdly agressive and they JUST NEVER QUIT. So, we’re sure we’re not the only ones who’ve been driven a little bit loopy by them in the past.

Well, yesterday everyone’s favourite Baldwin (Alec, but known to most as Jack Donaghy from 30 Rock), has decided that enough is enough after a troll who has allegedly been stalking/abusing and being a general pest to his girlfriend, Hilaria Thomas, took things too far. Baldwin decided to make use of his huge Twitter following and told his social media minions about the troll. He wrote:

“I have some wonderful, fully engaged and, sometimes critical people that I encounter here […] Some of them, very few in fact, cross a line and, for example, attack my relationship with my daughter. One person, however, has really gone too far.”

He then told everyone the Twitter handle of the crazy person, @scarfacemadam, and mobilised his troops by saying:

“[this user] has entered the twitter-verse ONLY to harass my girlfriend […] that is borderline threatening.”

He then asked his followers to:

“Go to her address, and read just a few of her posts, and give her your notice of her behavior.”

It’s no surprise that the legend that is Baldwin’s calls to action paid off. Many of his followers said things to @scarfacemadam, then she/he deleted their Twitter profile soon after. According to E!, Baldwin has declined to comment on the story and deleted a lot of his tweets asking for help.

Now as we said earlier, we totally understand Baldwin’s frustration. Trolls are nasty. Trolls that attack a loved one are even worse. But, we can’t help but think that mobilising an online lynch mob to be just as agressive back to @scarfacemadam isn’t the answer.

But then again we’re not willing to argue with Jack Donaghy. Ever. So tell us what to do next please Jack, we’re ready and waiting like mindless drones for your next command.