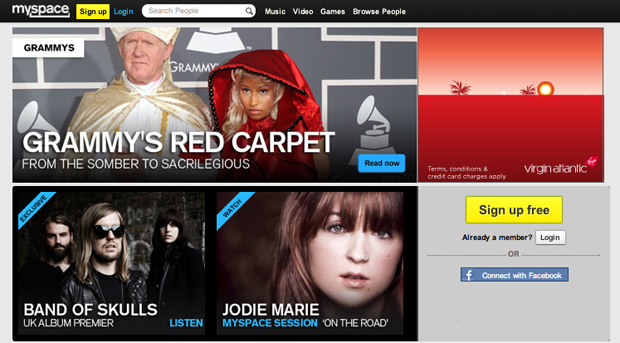 Ahh Myspace. It was probably everyone’s first social networking experience (hold on, does anyone else remember Faceparty?!), we followed local bands, we posed within an inch of our lives and added 5,543,399 friends a day. But then over the years Facebook took over and despite attempts by Myspace to become an “entertainment hub” or a “one-stop-shop for music lovers”, everyone just kinda forgot it existed…

Well, it seems that’s no longer the case, as according to PC World, the once huge social network has grown at a speedy rate over the past few months and may soon be announcing it’s added one million members since December. Yep, we couldn’t quite believe it at first either.

Specific Media bought MySpace from News Corp back in June and since then its music library and social network integration appears to have led to the rather unexpected comeback. Although we’re not entirely convinced that Myspace is set to take over the web again, with a Panasonic partnership, dedicated TV app on the cards, online chat functionality and plenty of exciting plans in the pipeline we’re interested to see what’s next for the social network of our teenage years.