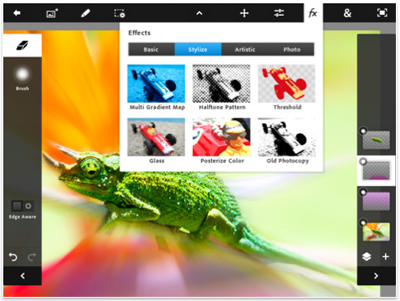 Photoshop Touch comes equipped with all kinds of tools you’d expect, like blurring, clone stamp, layers, cropping and much more. In this way it’s very similar to the desktop version we’ve all come to know and love, but as you’d expect from a super modern tablet application, it also allows you to take advantage of touch gestures and controls in a big way.

A few of the features that stand out include being able to use the tablet’s camera to create a new layer, there’s a scribble select tool, which allows you to do just that, scribble and there are all kinds of sharing and syncing options, like being able to save projects to Adobe Creative Cloud so you can work on them on your PC later.

We imagine it’ll be a very handy application for those who like to play around with photos in their spare time, but could very well prove to be a professional on-the-go resource for those working in the creative industries too.

Photoshop Touch is available for iPad 2 devices from the iTunes store and Android tablets from the Android Market for £6.99, which may seem a bit pricey for an app but considering how powerful Photoshop Touch is, it’s actually really good value for money.