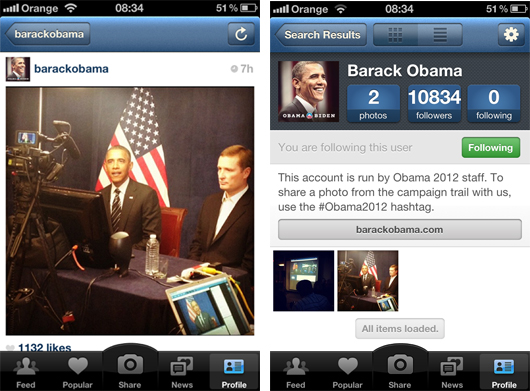 Yesterday US President Barack Obama went and got himself an Instagram account (or at least his team got one for him). In an official blog post about him, the Instagram team writes that the social network will become an interesting place in the run-up to the 2012 Presidential Election, with news organisations like NBC News and The Washington Post already sharing a behind-the-scenes peak at debates across the country. It’s really fascinating that a photo-sharing app and social network used to showcase photos of cats and food can also be a useful tool in the run up to important political events. As if you needed another excuse to start using it more?!

So here’s our list of five (relatively new) newbies that are worth following:

The US president signed up for an Instagram account yesterday and already has more than 10,000 followers. We’re expecting big things from Team Obama and can’t wait to see how they utilise Instagram over the next year.

Quirky American actress, funny girl and singer/song-writer Zooey Deschanel joined Instagram late last year and has since shared a number of cute and hilarious photos of her personal life, her nails and the other celebrities she meets. We just want her face/hair/job/talent now please.

Tiffany’s shares the kind of beautiful and dreamy photos you’d expect from the iconic jewellery brand, with some product promotion, plenty of behind-the-scenes snaps and lots of lovely festive photos from over Christmas.

We know, we know, he definitely shouldn’t be in the same list as the US President but if you happen to be a huge Bieber fan then you’ll love following his Instagram feed for personal photos and behind-the-scenes shots. There’s obviously plenty of cheesy promotional stuff thrown in there for good measure too.

Another celebrity who may not be everyone’s cup of tea, but does regularly update Instagram with lovely, personal and very well-taken photos.

For more well-known users, check out Instagram’s Notable Users Directory, it may be a bit US-centric but it’s a pretty interesting and comprehensive list.