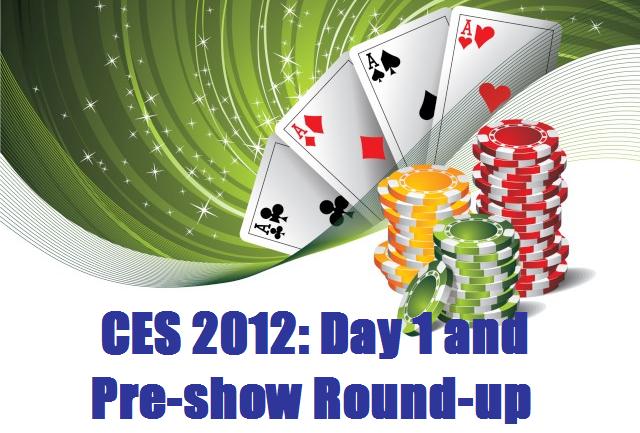 Viva Las Vegas! Tech Digest and Shiny Shiny are back bringing you all the latest technology news from the annual CES (Consumer Electronics Show), direct from Sin City itself.So far we’ve seen a ton of TVs, cameras and phones, but the most exciting (and rapidly expanding product category looks to be ultrabooks, with all the major PC and laptop manufacturers throwing in their first stabs at the ultra-portable, ultra-powerful form factor.

For your easy-reading pleasure, we’ve collected all of our pre-show and day one CES 2012 coverage below. Take a look, and feel free to fire over any questions or requests for a closer look at any gear via our Twitter feed.

Won’t stop that cheeky monkey from Planet of the Apes destroying the world though. You Maniacs! You blew it up! Ah, damn you! God damn you all to hell!

Because everyone needs to see your YouTube reaction videos in real-time.

Features the same screen technology Sony put in their HDTVs

For the Peeping-Tom in your life.

Kinect motion controlling its way to Windows in February

But will only support development for Windows and Xbox 360 apps.

And not a fitness freak in sight.

This ultrabook could do with a good dinner.

Already available in Korea and hitting the UK soon.

Samsung 55 inch OLED or LG 55 Inch OLED? I like them both. But which one is better? There’s only one way to find out…

Another Ericsson-less smartphone from Sony.

Smarter than an R2 unit, doesn’t suffer from “bad-motivator” syndrome.

Are whopping camera specs enough to tempt you into the Windows Phone herd?

Impressive specs in a compact body size, but may prove to be a little too pricey.

No excuses not to buy those crotch-hugging skinny jeans now.

Specs and a release date for LG’s lust-worthy OLED TV.

Superfast download speeds with a screen that will work well in direct sunlight.

Lenovo IdeaPad U310 and U410 ultrabooks revealed

Lenovo get in on the ultrabook action.

Samsung bringing Skype and Internet to your TV with InTouch

Never need charge your Kindle again thanks to this cover, providing you live in the Gobi desert.

Don’t quote us on this, but we think jukeboxes may now be AirPlay enabled thanks to this Griffin gadget.

Will LG’s Google TV succeed where so many others have failed?

One for the posers and one for the wannabe Bear Grylls out there.

Both Apple and Samsung smartphones wirelessly supported by these high-end docks.