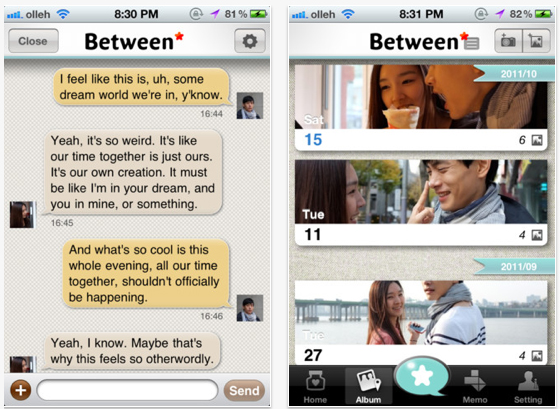 If you’ve got something to share with your significant other you’d usually text them, email them or DM them on Twitter, right? Well, a new app and social network called Between wants to give you a special little virtual place to cosy up to your girl/boy instead of having to contact them through other channels. It sounds kind of sweet, but is it also utterly pointless?

Between is what you’d imagine, like a mini Facebook just for you and your partner where you can share content, photo albums and memories (awh), all you need to do is enter their phone number into the app and you can start sharing.

According to The Next Web, the minds behind Between are mainly targeting Asian users, who (judging from behaviour on social networks) are a little more uncomfortable about sharing personal details online than us party-loving Brits. Therefore the app has been released in English, Japanese, Chinese and Korean in recent months. And, although it may seem very twee and stupid to some people, the 62,000 who have downloaded it and are actively using it worldwide would probably disagree.

It kind of makes sense that an app which encourages couples to communicate more would be healthy for modern day relationships, after all if women’s glossy magazines are anything to go by (probably not), lack of communication is one of the main reasons happy couples break up. However, if you’re already content with emailing, texting, DMing, Facetiming, Skyping or calling (we could go on and on here) your significant other, then we’re not sure Between will crowbar its way into your daily routine.

Between is available from both iTunes and the Android Market for free.