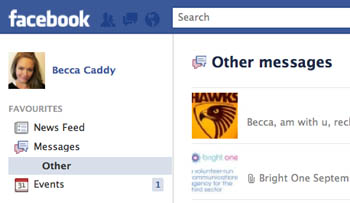 Some of you may think this is old and boring news, but others may be shocked to hear that you don’t just have one inbox on Facebook, you have two, one called Messages and one called Other.

You’re only alerted with an email or a notification when a friend sends you a message, it pops straight into your Messages inbox and you usually read it next time you log-in. However, people that aren’t your friends can message you too and their communications with you go into the Other inbox.

Other sits right below the regular inbox, so chances are if you spend a lot of your time on Facebook you’ll have had a play around with it before, but lots of people are getting very frustrated that they weren’t officially told about the sneaky Other inbox, as they’ve been missing out on all kinds of important messages. Although, I personally find that quite hard to believe. My Other inbox for some reason contains messages from events that I’m going to, as well as messages from random weirdos who have found me through pages that I’ve liked. Nice.

Whether it’s a folder for spam and creeps or contains a few hidden gems, we thought we’d let you know about the Other secret inbox so you can go check for yourself. From what we can see there’s no way to change your notifications so you get an email when an Other message arrives, so be sure to keep checking back.