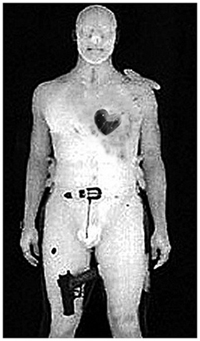 In recent years the use of various kinds of body scanners and x-ray machines at airports across the globe has caused a great deal of controversy, with many concerned about the health implications and of course even more worried about being seen naked by random airport officials.

According to io9, a recent PBS NewsHour investigation over in the states found that 100 passengers could develop cancer each year due to the high levels of radiation emitted when they have x-ray scans in airport security.

Although those numbers aren’t officially confirmed, it’s still quite a worrying statistic and unsurprisingly has prompted the EU to address the health implications of security methods within its remit.

In a press release issued earlier this week, the EU announcement makes it clear that each airport can decide which security procedures they follow, but they must adhere to a new set of guidelines:

“It is still for each Member State or airport to decide whether or not to deploy security scanners, but these new rules ensure that where this new technology is used it will be covered by EU wide standards on detection capability as well as strict safeguards to protect health and fundamental rights. Experience to date shows that passengers and staff generally see security scanners as a convenient method of screening.”