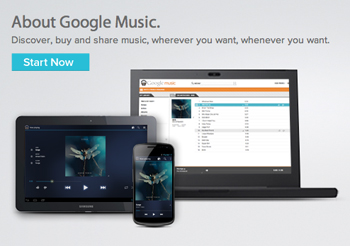 Earlier in the year Google introduced Music Beta over in the states, and for some time now we’ve all been speculating about when it’ll be officially launched, what it’ll mean for Google+ and whether people will ditch the likes of Spotify and Deezer in favour of Google’s shiny new offering.

Yesterday on the Official Google Blog, the brand announced that the beta version has evolved into a broader platform now known just as Google Music, which is available in the US today.

According to the blog, the service will be all about, “discovering, purchasing, sharing and enjoying digital music in new, innovative and personalized ways” and offers free-of-charge cloud storage and (some limited) free streaming of your favourite music.

As all of your music library will be stored away up in the cloud, you can listen to and manage all of your tracks and playlists across multiple devices and listen offline too, much in the same way you can with Spotify. Although you’ll be able to store your tracks for free and stream some of them, song prices range from around 69c to 99c and $1.29, the same as we’re used to on Apple’s iTunes.

Google has made it very easy for users to find music as it opened a new store in the Android Market yesterday, which offers users more than 13 million tracks from a range of artists on Universal Music Group, Sony Music Entertainment and EMI among others. In many ways, Google’s trying to set itself apart by giving users exclusive music content they won’t find elsewhere, from the likes of The Rolling Stons, Coldplay and um, Shakira.

In a very interesting twist, there’s lots of opportunity for aspiring artists to get plenty of exposure on the platform, as anyone who has the rights to their music can distribute it using the Artist Hub interface. This allows them to create an Artist page and then sell their music for any price they please.

There’s obviously a huge social element and Google+ integration too, as you can share a free full play of a purchased song with your friends. But only once, mind. All songs and albums will have a “share” button, which allows you to share everything to your Google+ stream and obviously choose which circles see it.

When can we get it?

Google Music is unfortunately only available over in the US at market.android.com for now and it’ll be rolled out to devices running Android 2.2 and above over the next few days. However, you can pick up the app from Android Market right now and start straight away if you’re feeling impatient.

Let’s hope Google sorts out all of its record label negotiations elsewhere too, so us poor Brits can give it a go soon.