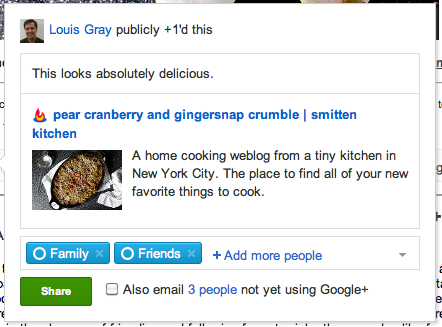 This week Google has changed the way its popular RSS reader product works, making it much more integrated into the Google+ experience and giving it a clean new redesign too.

Google has stopped the native social sharing features that used to be available to Reader users, such as “Like”, “Share” and “Share with note”. Instead you can now “+1” a feed item and then specify which circles you want to share it with and whether you want to add a comment too.

The Reader interface has also had a new lick of paint, with a cleaner and simpler design that’s much more akin to the way Google Mail and Google+ now looks.

In our opinion this isn’t a big deal for those who already have a Google+ account and probably won’t change the way you use the service too much. In many ways it’s a very understandable move from Google, as we can imagine those who set up a Google+ account but haven’t been paying it enough attention to be much more likely to share interesting stories now the functionality is built-in.

The only people that might be a little bit angry by the changes are those that have been avoiding Google+, as you’ll now need an account to access Reader. Those who use a pseudonym for Google Reader may also face problems as Google is still standing by its decision to only allow “real names” on the social network. There’s been a lot of controversy around Google’s decision to ban pseudonyms and although it’s hinted that they’ll be allowed at some point, we’re still not sure when just yet.

As usual people have taken to Twitter to talk about the updates and so far there have been many mixed reactions, with some agreeing with us that it won’t really change anything and others feeling frustrated that they’re being forced into the world of Google+ kicking and screaming. Google obviously expected some negative comments, so in the blog post about the changes justified the decision:

“We hope you’ll like the new Reader (and Google+) as much as we do, but we understand that some of you may not. Retiring Reader’s sharing features wasn’t a decision that we made lightly, but in the end, it helps us focus on fewer areas, and build an even better experience across all of Google.”

This is just the latest example of Google making changes to the way some of its products work, like Blogger and Picasa and introducing more ways to make your online experience as Google+ centric as possible.