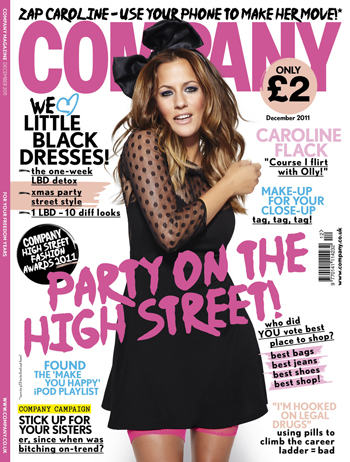 Hearst Magazines UK, which is the company behind popular women’s titles like Cosmopolitan and Harper’s Bazaar, has teamed up with augmented reality app Zappar to bring the December issues of a number of its popular magazines to life.

All readers need to do is buy their favourite magazine, download the free Zappar app and then point it at the cover to see exclusive content, which differs depending on which magazine you’ve bought. For example, Cosmopolitan readers can watch the cover star, Jessie J, talking about the Cosmopolitan Women of the Year Awards, but if you prefer Company to Cosmo, you can see cover star Caroline Flack giving an exclusive introduction to the title’s little back dress issue.

“We are thrilled to be working with Hearst Magazines UK on such iconic brands showcasing exclusive content. The potential for future publishing & content delivery models using Zappar are fascinating. Being able to explore these avenues with such a fantastic stable of brands is a real privilege.”

Although we’ve seen augmented reality integrated into our offline and print publications in the past, it’s good to see Hearst Magazines and Zappar bringing this kind of technology well and truly into the mainstream.

The titles will need to work hard to keep readers interested though, if this is going to be a regular feature a short interview with a celebrity isn’t going to cut it week after week. But, the partnership will allow Zappar to showcase its app and give Hearst Magazines UK an edge, really building on the run-of-the-mill printed magazine experience, which many are bored with in comparison to just how much content they can see and interact with online.

The December issues of Cosmopolitan, Company and Harper’s Bazaar will be available to buy over the next few days.

The Zappar app is available for free from iTunes and the Android Market.