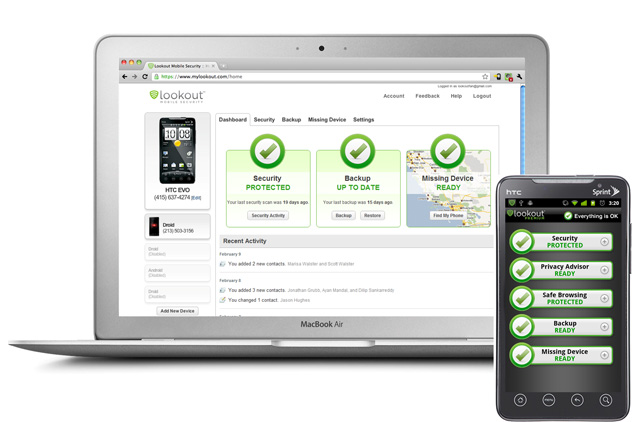 This week US-based company Lookout Mobile Security has brought a new app over to UK phones, which will help us all to better understand how to keep our mobiles, data and personal information safe and secure.

The new app, called Lookout, stands out in comparison to similar offerings on the app market because it doesn’t scare us into a frenzy about malware, mugging and missing photos, but instead helps us to just get on with it in a quick, simple and easy-to-understand way that doesn’t come across as too pushy or condescending.

Admittedly, Lookout isn’t one of the most exciting apps we’ve featured in our ‘app of the day’ slots, but it does help you to solve some of the biggest and most popular mobile phone dilemmas, so in the long run it’s much more useful than a piano app or Angry Birds…

Problem one: Argh I lost my phone!

If my Facebook friends are anything to go by, people lose their phones a lot, but whether you’ve just been careless, a little too drunk or mugged, you need to act straight away.

Depending on the circumstances you may need to go straight to the police, but you can also use Lookout to do a few handy things too:

Locate your phone with Lookout’s tracking features.
Activate scream and make your phone play a very loud siren even if it’s on silent.
Lock your phone so no one can access your content.
Wipe your phone so even if someone gets access to your stuff they won’t be able to see anything.

Problem two: I’m worried that if something happens to my phone all of my images and content will be lost.

If you’re worried you may lose your phone or accidentally delete something important, you can use Lookout to set up regular data backups so if something happens you can keep your contacts, photos and messages safe.

Problem three: I think I may have downloaded something nasty onto my phone.

If you’ve got an Android phone you may not already know, but it can easily be infected with malicious malware just like your computer can. It’s not as common on your mobile, but it’s important that you stay safe as there are currently around 1,000 instances of malware on Android devices and that number is growing by the day.

Sometimes malicious apps are obvious, other times they’re really not, so Lookout will help you by alerting you when something nasty has been downloaded.

Problem four: I find it weird that so many of my apps know where I am all of the time.

There are many apps you’d expect to keep a track of your location, like Foursquare or Instagram, but all kinds of other apps know where you are too, sometimes no one’s sure why they need to know, other times it’s because they’ll use your location for targeted advertising. Some people don’t seem to mind that they’re being watched, but if it freaks you out then Lookout can tell you which apps have access to your location and then you can look through and get rid of any accordingly.

Problem five: I want to buy something using my mobile device but how do I know that everything is secure?

Lookout will tell you whether you’re using unsecured WiFi or not as you browse, so you can see whether it’s safe to add in personal and financial details or whether you should just wait till you get home.

Lookout is primarily for those who are concerned about privacy and want to stay safe. However, it shouldn’t just be seen as an app for the paranoid worriers out there, as online security and malware issues are becoming more widespread by the day. So, we think Lookout is an essential app for everyone with an iOS or Android device, because most of the features are free and it doesn’t hurt to download it and have it there “just in case”.

However, there’s a premium version for Android which includes more browsing and malware alerts, the ability to wipe your phone if you lose it, privacy scans and enhanced backup. Although all of these features are very useful, unless your phone has lots of sensitive data and content on it or you depend on it for business, then stick with the free version until you figure out whether you really need to beef up your security for £1.99 a month (or £19.99 a year).

Available for iOS and Android devices for Free. If you’re interested in the premium version then get it directly from Lookout.