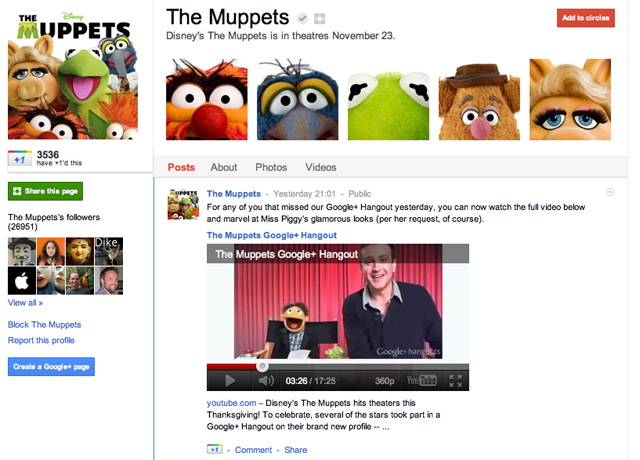 Earlier in the week Google+ launched pages for brands and businesses, and since then we’ve seen big brands take to the platform, some users slate the whole idea (like Google+ advocate Robert Scoble) and others discuss its huge potential.

The general consensus seems to be that it’s still such early days for Google+ as a place for individuals (let alone brands), so making predictions about whether it’ll “change the face of social media” and the way we communicate with businesses in the future all seems a little futile.

Some brands have already been using the platform and it’s interesting to see user’s reactions to their efforts so far, look at the pages from Burberry and Angry Birds for promising examples. However, what we’re most excited about (and would like to predict has the biggest potential) is the prospect of brands holding hangouts with users and loyal fans.

For those who’ve avoided the Google+ hype up until now, a hangout is basically a way for groups of people to have video chats with one another. Many expected this cool feature to be a little different for brands, but no, now businesses can potentially hangout with people just as a few friends would on the platform. In fact, one or two brands on Google+ have tried ‘hanging out’ already, like Kermit and Miss Piggy from The Muppets.

However, it’s important to remember that it shouldn’t just be about pumping out video content or uploading ads, instead we think there are a few key things we want to see from our favourite brands on Google+ that will really make us want to hangout:

Hangouts may seem shiny and new right now, but in the future we imagine there’ll need to be a compelling reason for regular users to hangout with brands time and time again. Offering people exclusive, behind-the-scenes access to something they wouldn’t normally get to see or experience, like interviews with celebrities at a movie premiere, or a video about the making of a designer dress, could be a great way of keeping people interested in hanging out and engaging themselves.

2. Interviews which let us get involved

Hangouts need to take into account what regular users are saying and doing. Of course we don’t expect a big brand or celebrity to answer the 5,575 questions they’re likely to be getting all at once, but users will expect them to reply to a few people at least, so it doesn’t come across as too ad-like or one sided.

3. Live feeds to events and announcements

We’re not really sure how it’d work in practice, but a representative from a brand giving Google+ users a sneak peek of a new product or a live event would be particularly useful at fashion shows, or when a highly anticipated new product is launched by the likes of Apple.

So many brands and public figures blog already, video blogging through a Google+ hangout would be an amazing way to not only tell people what the brand or celeb has been up to, but allow people to interact with them too.

This may seem like the most boring option, but could potentially be the most valuable to brands. Holding Q&As about products and using Google+ hangouts as a new way to approach online customer service could be the personal touch people need when they’re looking to get advice about brands, products and services on the internet.