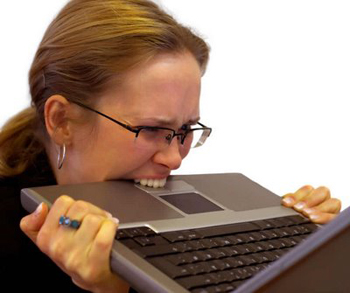 As Christmas is now less than five weeks away (insert shocked and panicked “the year has flown by” statement here), we’ve been talking to lots of our friends and colleagues about what they plan to do over the festive break and many said “stay away from Facebook” or “turn my laptop off” in a rather agressive tone.

It seems that as much as we often love and depend on the internet, sometimes we’re just plain sick of it and with lots of family gatherings, travelling, eating and drinking to be done, Christmas seems like the perfect time to switch off.

We’ve compiled a list of things that we see (and admittedly do) far too often. So if you answer yes to five or more of these (we scored at least eight), then it shows that you and the internet need a bit of time apart.

1. When you meet people in the real world (I know, weird, huh?) you call them by their Twitter handle as apposed to their actual name.

2. You must read at least all of the headlines (and probably all of the articles) in the Daily Mail’s ‘sidebar of doom’ before you can even think about starting any work.

3. Hitting “Mark all as read” in Google Reader when you’ve actually read nothing makes you feel very rebellious.

4. You spend more than a minute thinking of a way to make that next tweet even wittier.

5. Without even thinking you click on every link that says something along the lines of NSFW pictures / Jessica Biel naked.

7. You write job lists upon job lists and store them across Word, two different apps and write them all down too.

8. You check who’s unfollowed you on Twitter more than once a day.

9. You change your avatar as soon as you get a new hairstyle / hair colour / just a new top.

10. You’ve Googled / YouTubed Justin Bieber, just to see what all the fuss is about.

11. The only thing that makes you enthusiastic about life again is a cat video marathon.

12. You realise that you don’t even remember what you just took a photo of because you’ve added that many filters, borders, blurs and light effects to it.

14. You check Twitter / Facebook / emails / general online news at least once during a good film at the cinema / important date / meeting with old friends.

15. You bid on things on eBay just because they’re super cheap, not because you need them / want them / like them.

16. You realise your Facebook profile / timeline details everything you’ve done over the past fortnight, from the events you attended to the stupid thoughts you’ve had.

19. Checking-in on Foursquare at the pub is more of a priority to you than saying hello to the group of friends you’re meeting or even ordering a drink.

20. You spend more than five minutes staring at a hex colour chart in an attempt to really find out which shade suits your personality.

24. Stupid comments from trolls / annoying people on Twitter cause you to swear angrily at your computer and hit things.

25. You’ve watched 3,384,283 how-to beauty and hairstyle videos on YouTube yet you’re sat in your pyjamas and have nowhere to go.