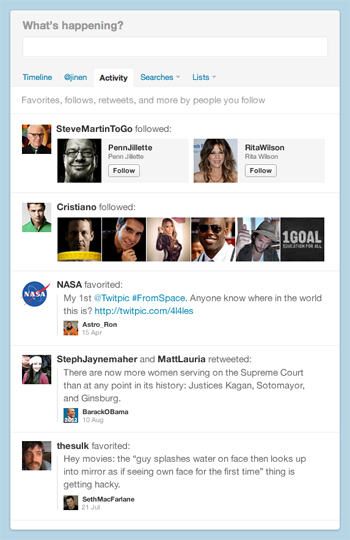 Although some users seem to have had Twitter’s new Activity tab for a month or so, most of us noticed the sneaky little new addition last week.

What does it do?

The tab is located next to your @mentions and it features all kinds of information that you wouldn’t normally be able to find quite so easily. The Twitter Blog states:

“It provides a rich new source of discovery by highlighting the latest Favorites, Retweets, and Follows from the people you follow on Twitter – all in one place.”

Why do we need it?

The more people we all follow on Twitter, the more it becomes necessary for us to have ways of weeding through to read the most relevant tweets and finding new users that are interesting. So in theory, the Activity tab makes complete sense. In theory.

Is it any good?

After having a play around with the Activity tab over the last few days (and reading countless blog posts about how other users are finding it), we can’t help but feel that instead of helping us to sort through the rubbish, it just makes everything more confusing.

Firstly, all of the information just seems too fast, much like Facebook’s news ticker, so it’s quite hard to keep on top of everything that those you’re following have been doing.

But it’s not just that things move fast, it’s that a lot of it just seems a bit irrelevant. Sure there are plenty of theories to suggest we’d be interested in what friends of friends have to say, but in practice that isn’t always the case.

Now we know this is rather contradictory, but in places there’s too little information, especially when it comes to the users our friends have been following. It’s a bit pointless seeing lots and lots of usernames but then having to click onto each profile to see their bio and whether they’re worth a follow or not.

Should we pay any attention to it?

Overall we think the Activity tab is a feature that has potential, and with a little more work could be a great way of differentiating Twitter’s offering from those of popular third party developers. It can also be pretty interesting to see who’s been following and favouriting who, which appeals to our inner stalker. However, for now it’s just not for us. Although it sounds as if it’ll make things easier, instead it just makes us more confused. Good try Twitter, but we’ll be sticking with TweetDeck for the time being…