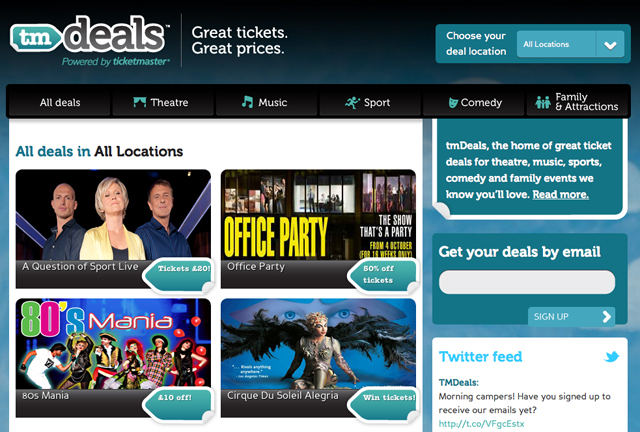 I think it’s safe to say we’re all very sick of daily deals, even the services that involve minimal effort and promise to pick the best selection out for us are still recommending beauty treatments we don’t need and salsa dancing classes we won’t like.

However, Ticketmaster has become the latest company to try and stand out in the overcrowded daily deals space with its new TmDeals service and we’re much more interested in the prospect of discounted event tickets than we’ve ever been about trips to steak houses and eyebrow waxing.

According to NMA, the site will offer a range of offers for sports, theatre, music, comedy and even special family events too which will all be delivered by email and based on a series of location and personal interest preferences. We think that as long as we can really tailor which deals we’re getting this could be a big hit. Interestingly, specific deals are also set to be promoted across Facebook and Twitter too, which will mean there’s less chance of the hidden gems going unnoticed.

One thought on “Ticketmaster launches daily deals we might actually want”