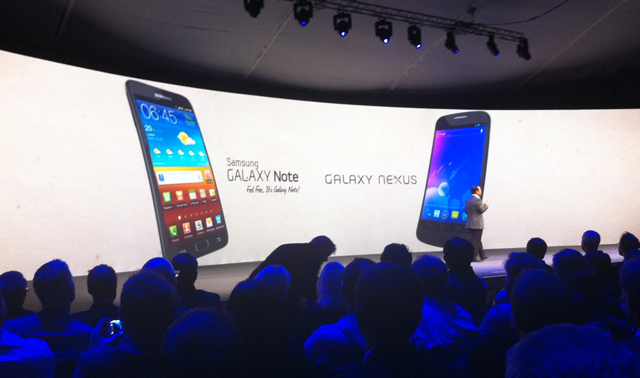 We first got a sneak peek of Samsung’s new Galaxy Note at IFA earlier this year and last night we were invited to the official launch of the handset in the amazing Battersea Power Station.

JK Shin, head of mobile communications at Samsung, kicked off last night’s launch by telling us that the handset “creates its own new product category” in the way it’s much more like a smart phone / tablet hybrid than anything we’ve ever seen before.

According to the Samsung team, the handset has been designed to let people do much more while they’re on the go, whether that’s note taking, watching media, communicating with people or drawing.

The main thing that REALLY differentiates the device from anything else on the market is its fancy new stylus. We know, we know, we thought the stylus was dead too, but with the Galaxy Note’s new S Pen (a whole new take on the classic stylus), you’ll be using it for pretty much everything, from navigating menus, drawing, taking notes, editing videos and much more. Interestingly, Samsung plans to release the S Pen SDK allowing app developers to create fundamentally new applications and services incorporating the pen functionality.

The Galaxy Note also has everything you’d expect from a smartphone, with a large 5.3in, 1280 x 800 Super AMOLED display running from a dual-core 1.4GHz processor. You’ll also be able to snap 8MP photos and record 1080p video footage too.

The Galaxy Note will be available here in the UK on the 2nd of November and so far Carphone Warehouse, O2 and Phones 4 U are on board.

Here’s a hands-on video from IFA earlier this year:

Last night wasn’t just about the Galaxy Note, but it was also a chance for the guys at Samsung to showcase the Galaxy Nexus, the first phone to run the latest Android offering, Ice Cream Sandwich.

The first thing you notice about the Galaxy Nexus is how it looks, it’s got a curved and contoured design, rounded edges and its completely buttonless too.

Like the Note, the Nexus is a very capable smart phone which will be faster than ever with a 1.2 GHz dual-core processor, a 1280 X 720 resolution display and fairly large 4.65 inch screen.

For those who love to take photos, the Nexus comes with a 5MP camera with zero shutter lag, a panoramic single motion feature and a new gallery.

The Galaxy Nexus will be rolled out across Europe on the 17th of November.