Facebook finally released its official iPad application earlier in the week and so far users seem to be pretty impressed with what it has to offer, such as a focus on chatting, a new slick sidebar and big ‘swipe-y’ photos.

In the excitement many people also seem to have overlooked the fact that all of the new and exciting changes we’re seeing in the Facebook iPad application have also been made to the mobile application too (it’s obviously just geared up for a smaller mobile screen), so be sure to upgrade if you haven’t already.

We had a play around with the new iPad application and realised just how great the interface looks on the big, multi-touch screen, so here are our first impressions. 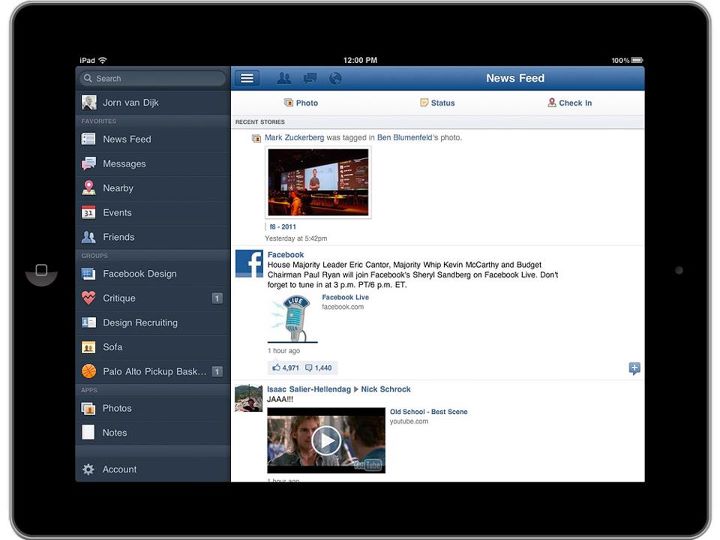 One of the things that first strikes you about the iPad application is the dark grey side menu bar on the left of the screen. It contains all kinds of bits and pieces, like pages, groups you’ve signed up to, messages and apps you’ve added as well as all of your usual privacy and account settings under the little cog at the bottom.

The great thing about the menu bar is it contains everything you could possibly need, BUT it can so easily be hidden away by hitting the button in the top left hand corner with three horizontal lines across it if you’d rather just browse status updates and save the more complicated bits and pieces for the web version. It also stays static too, so if you want to leave it up while you’re whizzing through your news feed it’ll stay put.

The news feed looks like it does on the web, click on videos and they play instantly, click on photos and they’re blown up to the full size of the iPad screen. 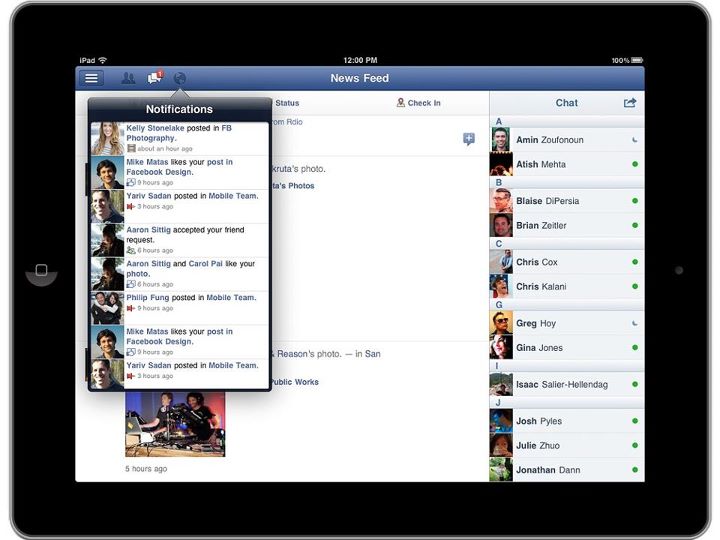 For me, Facebook Chat is a feature that I only use occasionally which sits at the bottom of my screen and often gets forgotten about. However, with the new iPad application the chat functionality plays a much more central role. It sits as a sidebar on the right of your screen (if you want to be online that is) and looks really integrated into the overall Facebook experience – much more than it does on the web.

If you start chatting with someone it sits at the side as you browse too and the conversation shows up like iPhone text messaging in little bubbles.

When you’re browsing through your friends you can click on the ‘nearby’ option and you’re presented with a Google Map full of your friends faces, which is a lovely feature even if it does seem a little bit stalker-ish. 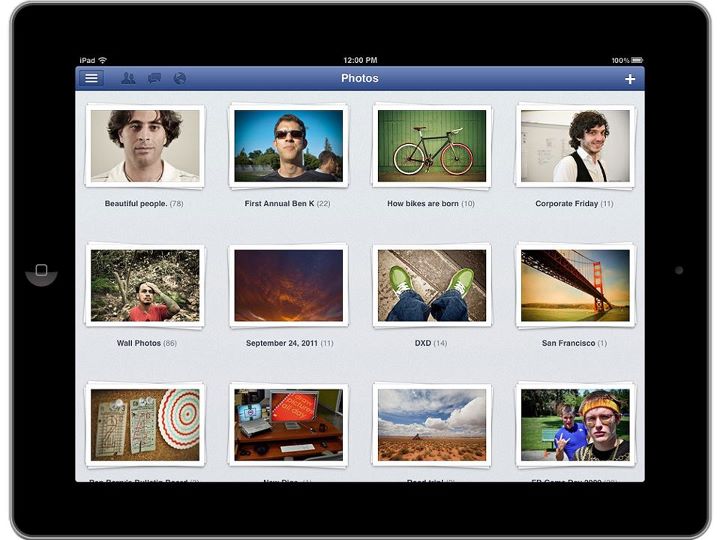 It seems the app has been specially made to really make the most of photos, allowing you to view them as a big grid, then click on one and it fills your screen and swipe through the rest of the album too.

Profiles don’t look vastly different (we were half expecting a much more timeline-like interface), but they’re kept very simple with the static default photo and various links to photos and info on the left and a continuous feed of information from the user’s profile on the right.

The interface is slick and intuitive, making it really easy to flick between pages and the different sections of the app. Also, EVERYTHING just looks great on the iPad, doesn’t it?! However, for me the most notable feature is Facebook Chat, which feels like a much more prominent part of the experience than ever before.

It’ll be really interesting to see whether things get tweaked a little once more and more people trade in a personal profile for a timeline or once we all get used to the news ticker a little more, but we don’t expect huge changes to be made only a few months after the initial launch, so only time will tell…