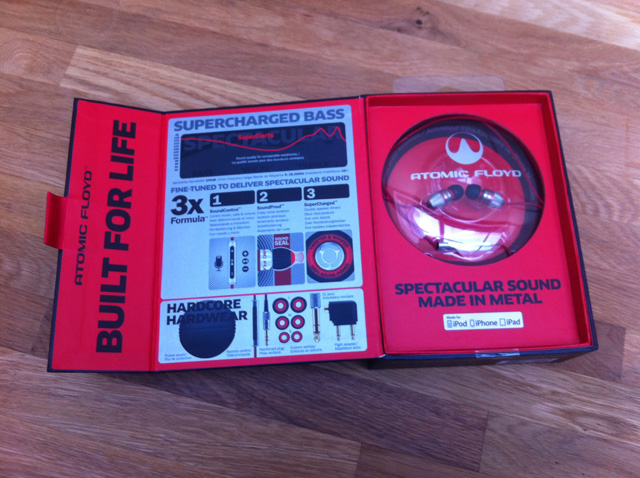 A lot of headphones claim to bring us good quality sound that’ll rival anything we’ve ever tried before. Most of them are good, but don’t really stand out in a sea of similar products that all deliver in terms of sound and look good too.

However, we were sent a pair of Atomic Floyd SuperDarts recently and we feel like we’ve found a hidden gem.

Since the Atomic Floyd brand launched in 2008 it’s been a firm favourite among music lovers who want great quality sound and a robust product without the frills.

The latest headphones, the SuperDarts, deliver on all fronts. They’re specially designed for the iPod, the iPhone and the iPad, they look good, sound even better and give us all the extras we need. It’s just a shame they’re a bit pricey…

One of the main reasons the SuperDarts sound so good is down to the high standard earbuds. They have all kinds of features, like double speaker drivers and two way noise isolation, which means you’re not going to get any dirty looks on the bus or be bothered by that crazy, shouting man.

It’s really important you get the right sized eartips to ensure you’re getting the best possible sound and quality bass. You can choose from small, medium and large and there’s a special seal between the actual buds and the tips, which makes them a huge pain to squeeze on, but does mean they’ll be more suited to your ears and sound better. The tips are also made of silicone and feel really soft, there’s nothing worse than stuffing a piece of scratchy plastic right into your ear. Eugh.

As I’ve mentioned, there are apparently all kinds of seals on the buds to ensure there’s no noise leakage or background noise, which is always the most important thing when it comes to good quality sound.

You’ll have to play around with the right sized ear tips to make sure they fit well but won’t fall out and cause any noise leakage.

The dual drivers mean you’re getting two mini speakers in each ear, a really rich sound and the clarity is unlike anything I’ve experienced from headphones before (honestly).

Although all kinds of music will sound great with the SuperDarts, they seem particularly suited for tracks with plenty of bass which really let them show off their skillz. 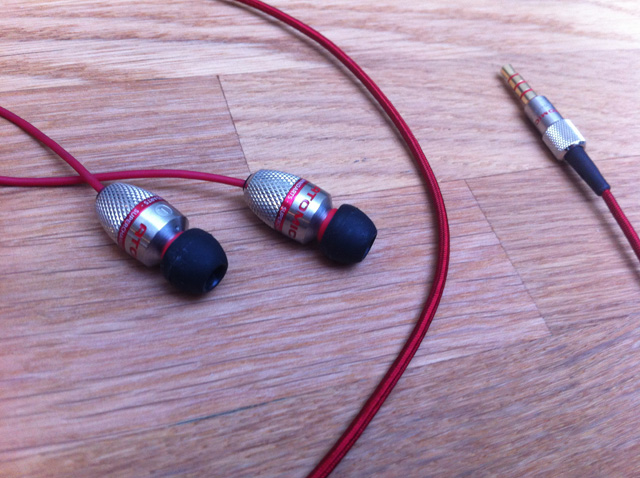 From the way they look, you can tell the SuperDarts mean business. They’re made of stainless steel and have red detailing as well as a red cable. They stand out but not because they’re overtly fancy, they just look stylish and pretty damn cool.

The cable has a Kevlar coating at the end, which means it feels nicer and stops them from tangling together quite so much. They can also be folded away easier too.

There’s a remote control on the cable which allows you to control volume, play, pause and skip tracks. There’s also a microphone attached to the remote control too, which lets you answer calls and change volume if you have the SuperDarts hooked up to your phone.

A quirky little Babybel-like case comes with the SuperDarts which is filled with different eartips, a DJ Jack and flight adaptor.

Who are they for?

Firstly, you obviously need to be a big fan of in-ear buds, they’re super comfy but they still go much further into your ear than say the run-of-the-mill Apple headphones (some people still get freaked out by in-ear buds).

They’re ideal for someone who wants headphones which deliver good quality sound and look great too. Of course you’ll have to have a few spare pennies lying around, the only downside to the Atomic Floyd SuperDarts is that they’re very pricey, but then again you do have to pay a bit of a premium for this kind of quality.

I imagine they’d also be well suited to those who use headphones on their commute or when they’re exercising and need headphones which will actually stay put and not annoy anyone else nearby.

The SuperDarts are coming soon to the Atomic Floyd website and the Apple Store and will be available for £199.