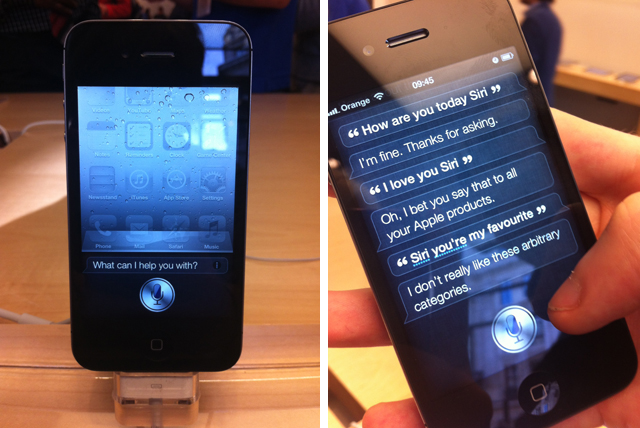 The iPhone 4S goes on sale today, in fact serious Apple fans will have already got their hands on one along with a high five and a clap from some VERY enthusiastic Apple employees earlier this morning.

Shiny Shiny and Tech Digest went along to Apple’s flagship Regent Street store to see what all the fuss was about.

There are many subtle differences between the iPhone 4 and the iPhone 4S, but really we were most interested in Siri, we wanted to see if it lives up to the hype, could be our personal assistant 24/7 and most importantly whether it’ll understand our regional accents.

After a quick hands-on with Siri we were pretty impressed, it understood our voices (mostly), gave us some tips and enabled us to open up emails, messages and reminders all with our voices.

However, according to Cnet, Siri here in the UK is yet to be able to give us local information other than bits and pieces about the weather. Apparently this is due to the fact Apple hasn’t committed to any deals with local UK providers, whereas over in the US Yell is powering all of that kind of information. So, it was a shame to not be able to trial whether Siri could tell us good restaurants or cinema information nearby, but from what we can tell that kind of knowledge won’t be too far off. We hope.

When it comes to the nuances of voice recognition there’ll obviously be a few teething problems to start with, it kept thinking “email” was “ring Mary” but I’m happy to write that off as an issue with my accent for now.

The only piece of advice we’d give is, don’t start trying to sweet talk Siri. It knows it’s special but clearly just wants to be your personal assistant and nothing more.